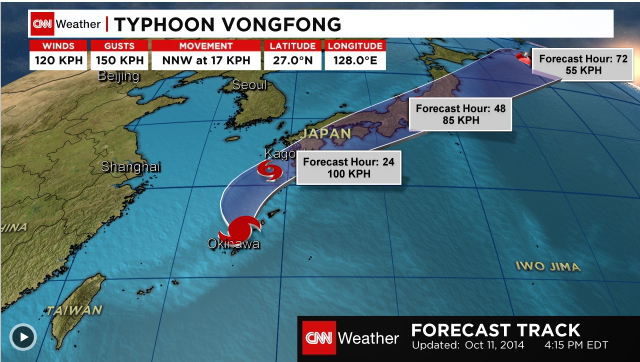 Typhoon Vongfong weakened Saturday but still tossed intense rain and waves at the Japanese island of Okinawa, including the major U.S. military base there.

The storm’s sustained winds dropped Saturday to about 75 knots (86 miles per hour) from earlier sustained highs on Friday of 155 knots (178 mph), according to the Joint Typhoon Warning Center. That makes it equivalent to a Category 1 hurricane.

“For your own safety stay indoors and continue to shelter in place until given instruction otherwise,” Armed Forces Network Okinawa posted on Facebook.

“It is an intense storm and we have been inside for the past 26 hours,” he said. “The island is well prepared for the storm. Housing is constructed with these storms in mind and base residents listened to military officials when instructed to prepare their homes for this storm.”

The storm is predicted to make landfall on the Japanese mainland islands Sunday or Monday, bringing the threat of gale-force winds, high waves and storm surges on Kyushu and Shikoku islands especially, according to the Japan Meteorological Agency.

The storm comes on the heels of Typhoon Phanfone, which swept over southern Japan earlier this week, washing three U.S. airmen — out to sea on Okinawa.

U.S. and Japanese search crews found the last airman’s body on Wednesday, according to a press release issued by authorities at Kadena.