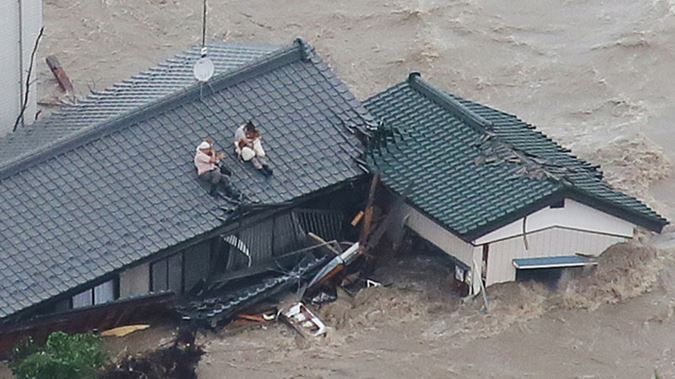 Tens of thousands of people have been ordered to flee homes across Japan as heavy rain pounded the country, sending radiation-tainted waters into the ocean at the crippled Fukushima nuclear plant.

Waist-high floods in some areas left rescuers scrambling to pluck people to safety as a wide area was deluged in the wake of Typhoon Etau.

“This is a scale of downpour that we have not experienced before. Grave danger could be imminent,” forecaster Takuya Deshimaru told an emergency press conference on Thursday.

More than a dozen people were injured, including a 77-year-old woman who broke her leg after falling in strong winds, local reports said.

Etau, which smashed into Japan on Wednesday, moved out into the Sea of Japan (East Sea) by the end of the day, but a wall of rain continued to lash the country.

Parts of central Tochigi have seen almost 60 centimetres of rain since Monday evening.

The torrential downpour has also exacerbated a contaminated water problem at the Fukushima nuclear plant as it overwhelmed the site’s drainage pumps, a spokesman for operator Tokyo Electric Power (TEPCO) said.

AFP calculations based on TEPCO data reveal hundreds of tonnes of contaminated water may have flowed into the ocean.

TEPCO is storing huge volumes of water used to cool reactors that were sent into meltdown when a tsunami hit Japan in 2011.

Tochigi authorities ordered more than 90,000 residents to evacuate the area, while another 116,000 were advised to leave their homes, public broadcaster NHK said.

In Ibaraki prefecture, at least 20,000 were ordered to leave for fears of floodings, NHK said.

“The government will stand united and do its best to deal with the disaster… by putting its highest priority on people’s lives,” Abe told reporters.

The meteorological observatory in Tochigi said the Kinugawa river, which also runs through Ibaraki, overflowed early on Thursday.

In Tochigi’s Kanuma city, a local official said rescuers were searching for a missing person believed to be buried in mudslides.

“We don’t know details of this person yet,” he said.

NHK reported it was a woman in her 60s buried after mudslides destroyed houses. Her husband was rescued soon after, it added.