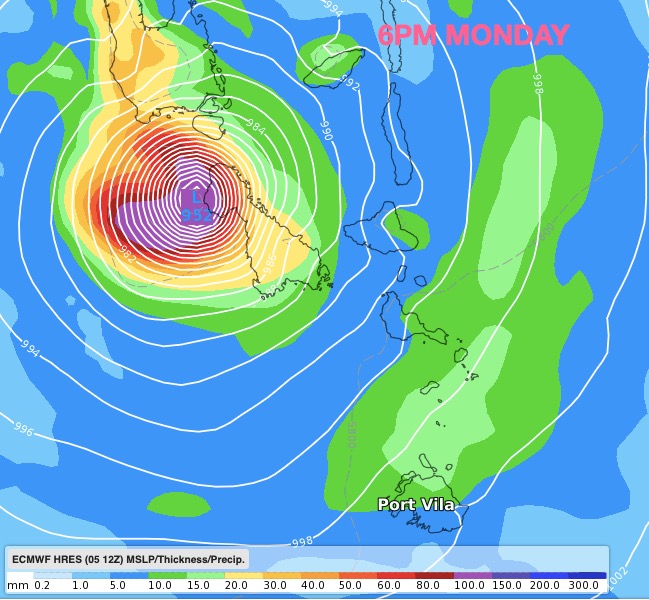 A worst case scenario is unfolding for Vanuatu today with Cyclone HAROLD reaching Cat 5 overnight, the highest level on the cyclone scale.

The violent and historical storm is now directly approaching Vanuatu.

HAROLD is slowly crawling towards Vanuatu in an easterly direction, moving at just 2 kmh (human walking speed is about 8 kmh).

According to the US Joint Typhoon Warning Center (JTWC) satellite imagery shows the centre of HAROLD has a wobbly, but tightly packed eye. It is generating waves of 11 metres (36 feet).

“For those in Vanuatu it doesn’t get much worse than this, a Category 5 tropical cyclone forecast to make direct landfall in a South Pacific nation” says WeatherWatch.co.nz head forecaster Philip Duncan. “There has been a decent build up to this storm with plenty of coverage but with the Covid-19 situation as well as a major Cat 5 cyclone makes this a much more complicated situation”.

Mr Duncan says HAROLD is slow moving over very warm waters but one positive is that on Tuesday it pulls away from Vanuatu quite quickly.

Fiji has a close call and some islands south of the main island will be exposed. Nadi remains outside most of the severe portion of weather on Wednesday but those in Fiji should closely monitor.

There is no direct threat for either New Caledonia or New Zealand.