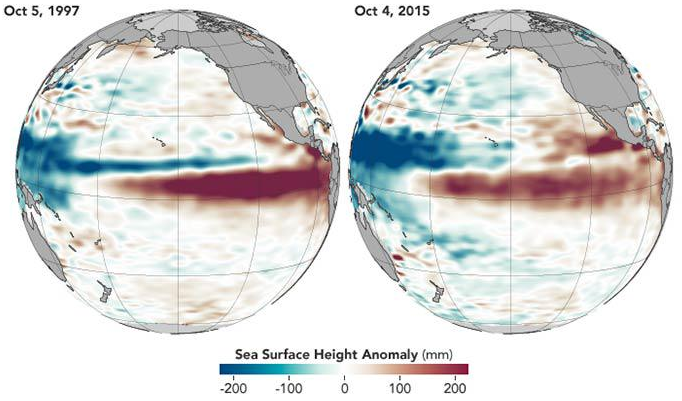 The latest analysis from NASA and the National Oceanic and Atmospheric Administration comes from altimeter readings of sea surface heights in the Pacific Ocean.

Water expands when it heats up and contracts when it cools down, causing changes in sea surface heights.

Both events had significant global impacts including droughts, floods and cyclones.

The 2015 data shows surface waters cooling off in the Western Pacific and warming significantly in the tropical Eastern Pacific.

The El Nino is being further strengthened by weakening easterly trade winds allowing stronger westerlies to push warmer air from the western and central Pacific towards the east.

The Australian Bureau of Meteorology said the El Nino should peak in late December before declining in the first quarter of 2016.

The Bureau of Meteorology is predicting that the drying pattern in south-eastern Australia will be exacerbated by the warming of the western Indian Ocean.

This pattern, known as a positive Indian Ocean Dipole, is now at levels not seen since 2006.

Ken Ring has a very interesting artice to do with this. Well worth a read 🙂