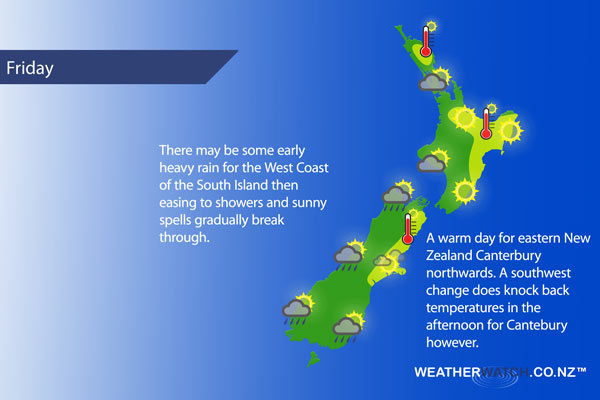 A westerly quarter airflow lies over New Zealand on Friday, within this flow a front pushes over the South Island however it peters out around central parts of the country during the afternoon / evening.

For much of the North Island expect mainly sunny weather, there may be some cloud at times in the west especially morning then sunny areas lengthen during the day. Winds from the west for most although an afternoon sea breeze may develop about eastern Northland and Hawkes Bay / Gisborne. Afternoon high’s in the mid 20’s for many, late 20’s for the eastern North Island.

Winds through Cook Strait will likely be brisk to strong from the northwest, easing in the evening.

Early morning rain for the West Coast of the South Island eases to showers and increasing sunny spells, especially afternoon onwards. Nelson and Marlborough may see a spot of rain in the morning then becoming mostly sunny in the afternoon with high cloud gradually decreasing. Canterbury is sunny and warm with breezy northwesterlies then a southwest change around midday cools things down a little, winds swing around to the east during the afternoon.

Southland and Otago see showers which ease during the day then clear late afternoon, it may become fairly dry after midday for coastal Otago with sun breaking through. Winds from the southwest.