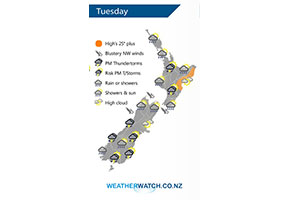 A front passes over New Zealand on Tuesday moving in a west to east fashion, this may carry some unstable weather for the North Island. In the afternoon in the clearance behind this front, parts of the lower eastern South Island may see thunderstorms also.

A mix of showers and sunny spells for much of the western North Island on Tuesday, a period of more sustained showers moves through starting in the west late morning then pushing eastwards. This area of more sustained showers may turn into thunderstorms from Waikato down through to Manawatu early afternoon then easing. Dry along most of the east coast, showers with a chance of heavy falls moves through the Wairarapa in the afternoon.

A busy day in the South Island, morning rain or showers about Nelson / Marlborough then some afternoon sun. Morning rain eases to showers along the West Coast, another burst of rain moves in late afternoon possibly heavy with thunderstorms. Mainly dry for most of Canterbury however South Canterbury through to Southland sees a spell of morning rain, drying out for a time then showers develop in the afternoon, once again some may be heavy with thunderstorms then clearing in the evening. 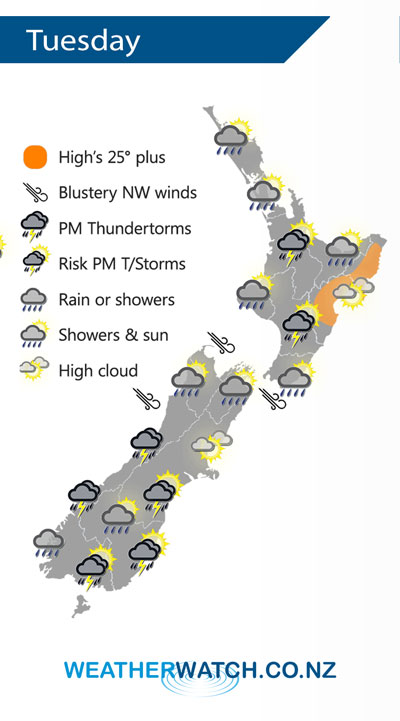