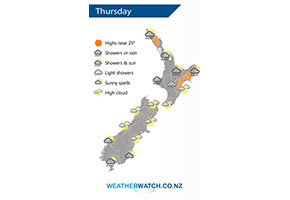 A cold front will continue to lie draped over the North Island on Thursday but is falling apart, with the rain clouds/showers breaking up further. A few heavy downpours are possible on Thursday afternoon inland here and there in the North Island as the last of the moisture moves over land and combines with daytime heating.

In the South Island it’s a fairly settled day with light winds and sunny spells. A few showers are possible in the deep south briefly in the morning.

Basically New Zealand is under a large high pressure system on Thursday bringing calm weather, but the front in the North Island has been trapped under it, which is why the front/rain band is falling apart but also why the high isn’t bringing perfectly sunny/dry weather to all of the North Island.

WeatherWatch.co.nz says that eastern parts of the North Island (like Hawke’s Bay) will reach the mid, possibly late, 20’s Celsius on Thursday as the nor’west flow continues.

The front weakens and moves further out to sea to the east on Good Friday with the high remaining in place over New Zealand. 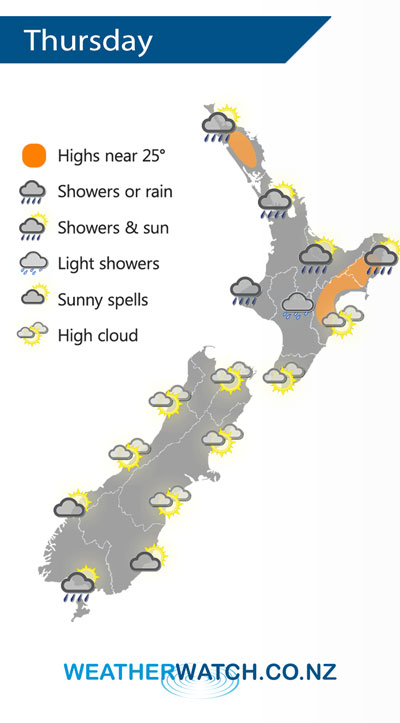