Indonesia – Search continues for the dead and missing 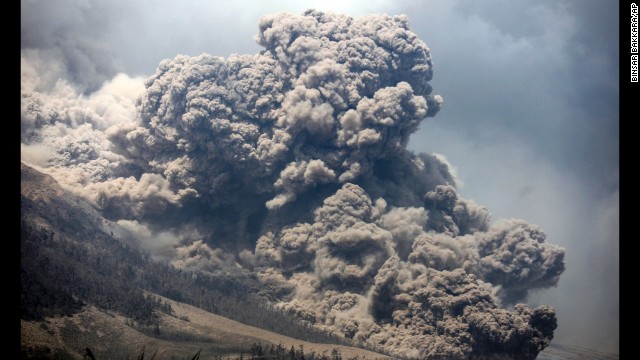 Search and recovery teams on Monday resumed their perilous task of looking for victims from the recent volcanic eruptions of Indonesia’s Mount Sinabung.

The death toll currently stands at 15 after plumes of ash spewed more than a mile into the sky Saturday and descended in superheated clouds.

Scalding ash up to 700 degrees in temperature raced down the slope in just two to three minutes, engulfing Sukameriah, a village close to the volcano’s crater.

A funnel of smoke has continued to shoot up from the North Sumatra mountain, turning the sky above the color of murky gray ash.

Recovery teams ventured into the affected area Sunday, but they had to call off their search because conditions became unsafe.

Dozens of them set off again Monday morning — a mixture of local rescue workers, military personnel and police — after Indonesia’s volcanology agency gave them clearance to proceed.

They will be conducting search operations within a 3-kilometer radius of the volcano, Taufik Kartiko, a disaster mitigation agency official, told CNN on Monday.

All of the dead, and at least three injured people, were found in Sukameriah, authorities said over the weekend.

It was the first time Mount Sinabung’s volcanic output had resulted in deaths, the Jakarta Post reported.

Eruptions at Mount Sinabung are becoming common. After about 400 years of minimal volcanic activity there, Sinabung erupted in 2010. It has been emitting gas since September.

The volcanic volatility has meant an itinerant existence for those who live in this region a 2Â½ hour flight from Jakarta.

Last month, intensifying volcanic activity forced 22,000 people into temporary camps, but more than half were allowed to return home on Friday.

At least 30,000 people have been temporarily housed at 42 evacuation centers, according to Billy Sumuan, the emergency response director in Indonesia for the humanitarian group World Vision.

Saturday’s victims lived within a 3-kilometer radius of the volcano. Some were there checking on their homes or were there just to watch the eruptions, Nugroho said.

Others were students and volunteers in the region to help its beleaguered people, Sumuan said.

The government had issued the highest level of alert for the latest eruptions, and Sumuan noted that no one was supposed to go inside a 5-kilometer zone around the volcano.

Several government agencies and nongovernmental humanitarian groups were on the scene Sunday helping those affected, including World Vision, which Sumuan said was helping children with their trauma and hygiene.

The government and local churches handed out masks to everyone to mitigate breathing problems, he said.

How awful for the people involved, awesome images! So much disaster with volcanos & Irish flooding. Mother Nature is being a little mean to some.