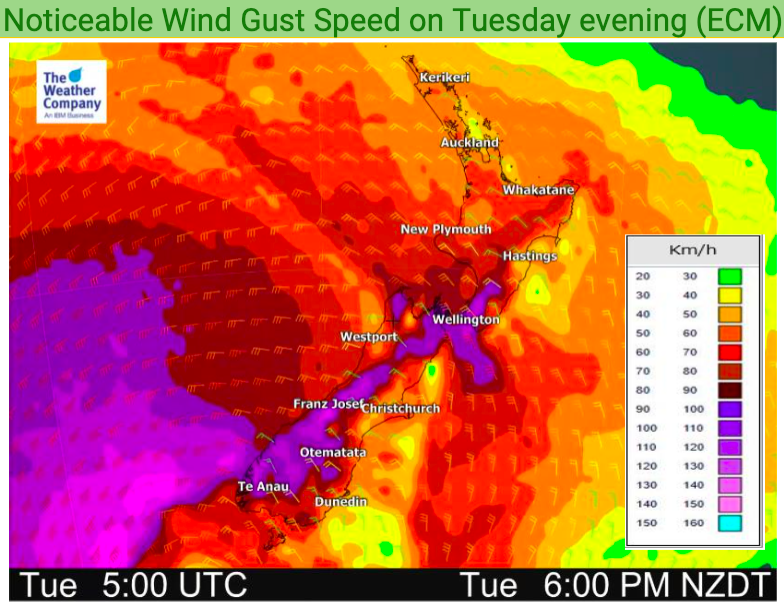 Damaging winds will develop on Tuesday with heavier snow in the Southern Alps then a colder than average day nationwide by Wednesday.

The unseasonable storm will generate winter weather conditions in some parts of the South Island. As we said on Sunday, travel plans may be impacted this week whether by plane, boat or road in both islands – especially the South Island.

Temperatures will drop below normal for most places but for some it won’t be a major cold change due to being in peak-summer.

This storm will leave an unsettled pattern around NZ right into this weekend, more so in the form of windy westerlies.

Despite the incoming low, many northern and eastern areas will remain mainly dry.

RAIN:
The low that came on Sunday and this next one on Tuesday and Wednesday will continue to drive in heavy rain to the West Coast and showers elsewhere. The very north and east of both islands, despite this storm, will likely be mainly dry and lean drier than average while the West Coast has a very wet week ahead.

Refer to your local rainfall totals at WeatherWatch.co.nz and www.RuralWeather.co.nz for more.

We have “New Zealand’s most accurate rainfall forecast data” according to an independent measure of NZ forecasters by the NZ Government (DoC) in November 2020.

WIND:
Monday is a bit windy with the westerlies pushing through but it’s really Tuesday afternoon, evening and overnight across Wednesday that winds look to peak in NZ. The ranges around Wellington and the Southern Alps peaks may see gusts over 150km/h later on Tuesday. Down at sea level gusts over 120km/h are possible.

Wellington looks to be the windiest of the main centres on Tuesday with winds averaging gale force in the afternoon and gusts to 130km/h possible in the city.

The Southern Alps, while enhancing the winds for some – will also make other areas sheltered.

On top of these usual Cook Strait wind tunnel conditions, the centre of the low in the lower South Island/Stewart Island area will also generate very strong localised winds. The timing of this keeps changing because modelling is still unsure precisely how the centre of this low will look on Wednesday. However, we do expect a secondary surge of windy weather on Wednesday mostly in the South Island as the main cold southerly kicks in. We’ll have more details about Wednesday’s wind risks on Tuesday morning when the forecast can be fine tuned further.

However a large portion of Monday and Tuesday will be cooler than average for many parts of NZ.

But it’s Wednesday when a windy, cold, southerly moves in. Temperatures aren’t quite as bleak as they looked a couple days ago but it’s still going to be over 10 degrees below normal in some locations during the warmest part of the day.

Dunedin has highs around 13 degrees on Wednesday with a feels like temperature of around 10. This is a few degrees warmer than what we were forecasting a few days ago now that we’re locking in the details much more.

But parts of Southland will be even colder. In Northern Southland places like Lumsden will have a high of around 10 degrees at the hottest part of Wednesday and the wind chill will make it feel more like 6 degrees…at 1pm in the middle of summer.

Milford Sound has a high of +9C and a feels like temperature of +6C at sea level. Higher up on the tracks it may feel more like 0C or even below freezing.

One positive is that temperatures have ticked up a couple degrees from some that were forecast over the past few days. But for those camping, hiking, or travelling this forecast is very much one that could impact you.

For the windchill calculator in your location see the HOURLY Temperature Trend Graphs at www.RuralWeather.co.nz.

SNOW:
With heavy rain on the West Coast for days in a row we expect snow to accumulate on the ranges with potentially over 1.5 metres of snow coming for the mountain tops. This is an exceptional amount for mid summer.

Being mid-summer snow levels are not too low with those below 1000m not likely to get a dusting. Keep up to date with the National Park and Mountain forecasts over at MetService for more details.

SEAS / BEACHES:
Windy westerlies are already whipping up larger seas to the west with beach conditions on ALL WESTERN BEACHES in NZ becoming increasingly dangerous over the next 24 hours.

Already today the North Island’s west coast has significant wave heights of 3 to 4 metres while the West Coast of the South Island has wave heights this afternoon of 4 to 5 metres and growing.

The low around the lower South Island will have central air pressure in the 960hPa range later on Tuesday – this is like dropping a big rock in a pond and watching the ripples come out quickly.

By the time we reach Tuesday night wave heights will be dramatically increasing with offshore waves of 14 metres from the lower West Coast. The entire southern half of the West Coast will have waves crashing in coastal areas of 12 to 13 metres and more populated beaches like Hokitika and Greymouth have waves of 7 to 10 metres developing overnight Tuesday and into Wednesday morning.

While the eastern North Island does have much calmer seas in the east it is VERY important to highlight the fact winds will be blowing from land out to sea. That means those on floatable devices have an increased chance of being blown out to sea even if the sea itself is fairly calm.

Please take EXTREME care this week in the water and if in doubt, please, simply stay out.