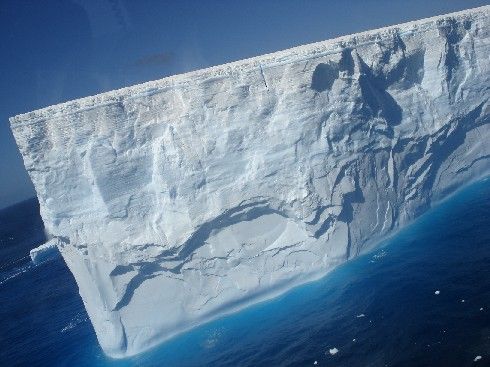 The New Zealand Herald is this morning reporting that more than 100 Antarctic icebergs – and possibly even hundreds of them – are floating towards New Zealand.

An Australian Antarctic Division glaciologist, Neal Young, said yesterday that the ice chunks, spotted in satellite photos, had passed the Auckland Islands and were heading towards the South Island, 450km northeast.

He said more than 100 icebergs – some more than 200m across – were seen in just one cluster, indicating there could be hundreds more.

Dr Young said they were the remains of a massive ice floe which split from Antarctica in rising sea and air temperatures resulting from global warming.

…remains of icebergs are not the result of global warming. The bottom line is that the Earth is getting colder, according to data presented by prestigious scientists, not junk science the NWO employs to bring about the funding of the NWO to be funded by carbon tax, which they hope to bring it all about at the Treaty on Climate Change in Copenhagen in December, 2009.

The fraud is currently being exposed thanks to the enterprising hacker/s into CRU e -mails and documents, at the University of East Anglia, where embarrassing and damning evidence of the NWO research scientists, admit their fraudulent data and coverups, including destruction of data which would destroy their NWO agenda for the culling of world population by 80%, and their plan for World Government, which would bring in the “unheard of reign of terror” as defined by Pope Benedict XV, in 1920.

But, thankfully, they have been caught red – handed, in their diabolical plan to defraud mankind, by presenting fake data as science!

….everybody has to meet their Waterloo, someday! 8 – D

…couple of links for further reading….