How will this week shape up? 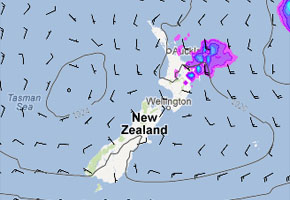 After today an anticyclone will begin to flex it’s muscles west of the country spreading a ridge over New Zealand however come Thursday a weak front moves through before a bigger high that’s been benching 8 hectopascals more moves in from the south.

So apart from the metaphors Tuesday is looking reasonably settled across both islands, a few showers will scoot past the east coast of the North Island however clearing Gisborne later in the evening. There is also the low risk of a few isolated showers about Waikato and the Central North Island in the afternoon for a brief time however it should remain mostly dry. Come Wednesday things are settled and mostly sunny across New Zealand once again however a front approaches Southland late in the day with showers developing there at night.

On Thursday this front moves up the east coasts of both islands bringing mainly drizzly conditions, out west it should remain mostly sunny. Friday sees sunny breaks appearing during the day in eastern areas, a mix of sunny areas and some cloud elsewhere. Northland and Gisborne may continue to see a few showers during Friday as an east to southeast airflow comes around a new anticyclone positioned over the country.

The weekend at this stage is a while away but may see another low pressure system or front building in the Tasman Sea with a northerly airflow set to increase over the country.