Home > News > Heavy rain heads south, but only half of...

Heavy rain heads south, but only half of Hola to brush upper North Island (+8 Maps)

UPDATED 11:18am Monday — Ex-Cyclone Hola, which still has Category 1 equivalent strength, is today pushing into the upper North Island bringing rain with heavy falls and pockets of severe weather too. The storm is, however, weakening as it completes the process to become extra-tropical and windshear is helping tear the centre apart.

Half of the storm will miss New Zealand remaining at sea, while the other half will brush Northland, Auckland, Coromandel Peninsula, Eastern Waikato, Bay of Plenty, East Cape, Gisborne and Hawke’s Bay in a weakened state – but still serious enough to prompt some severe weather warnings.

Severe weather will not likely be widespread across all those regions listed above in our view.

Damaging winds are most likely within 250kms of the centre of the low and that distance may reduce as it approaches East Cape tonight – this will make much of the worst winds lie out at sea, but may still brush or affect some populated parts of the upper North Island on Monday afternoon, evening and very early Tuesday morning before dawn.

Rain extends for about 300kms from the centre and is patchy and light at the fringes but heavy in the main area – which as of 11:15am was covering Aucland and Northland. Pockets of flooding is possible today there.

Most storms we get in New Zealand are widespread and affect large areas at once. With tropical cyclones (or ex-cyclones) the worst of the weather is only near the centre – the further away from the centre you go the less intense the weather is. With Hola half at sea it means intensity won’t be as widespread as we saw with Fehi and Gita which both made direct full hits with every part of the storm systems crossing land.

Latest modelling from various global Government forecasters shows the centre of Hola likely to brush East Cape late tonight and may make landfall (where the centre of the low crosses land) or it may just brush close by to the east out at sea.

WeatherWatch.co.nz says rain is now setting in across Northland and Auckland and approaching Waikato, Coromandel Peninsula and Bay of Plenty. There will be some heavy falls today as the centre moves closer. Winds will steadily pick up and for many areas it may not be overly stormy – but later today as southerly quarter winds kick in there may be some stronger gusts and winds reaching gale force. Some power cuts and trees down are a possibility in the upper North Island later today in exposed areas.

Last March Cyclone Cook made landfall in Bay of Plenty causing extensive damage to some areas there while nearby regions like Waikato and Auckland were mostly calm. These storms can be very localised.

Because Hola is going through the extra-tropical transition the centre of the low is expanding – this reduces the peak wind speeds and makes them less damaging but makes for a larger area of blustery to gale force wind. The rain is still just as intense but is being broken up more, so not all areas get the heavy rain.

If the centre of Hola remains at sea then damage in New Zealand will hopefully be minimal but there is enough energy brushing the country to cause problems and severe weather so people should be prepared for power cuts, road closures, some flooding in flood prone areas and the chance of localised wind damage in some exposed areas and wind tunnels.

In a nutshell two thirds of New Zealand is unaffected by Hola while the top one third is brushed by the outer edges of the storm and some are brushed – or affected by – the centre of the storm. Some regions, like Northland and East Cape may be more exposed to heavy rain and the strong to damaging winds.

Dangerous seas/coastal conditions will affect north eastern/eastern areas between Northland and East Cape, including parts of Auckland. Northern and north western East Cape along with eastern Bay of Plenty and some eastern parts of Northland may be most exposed to the biggest swells and possible storm surge as the centre comes in/tracks by. 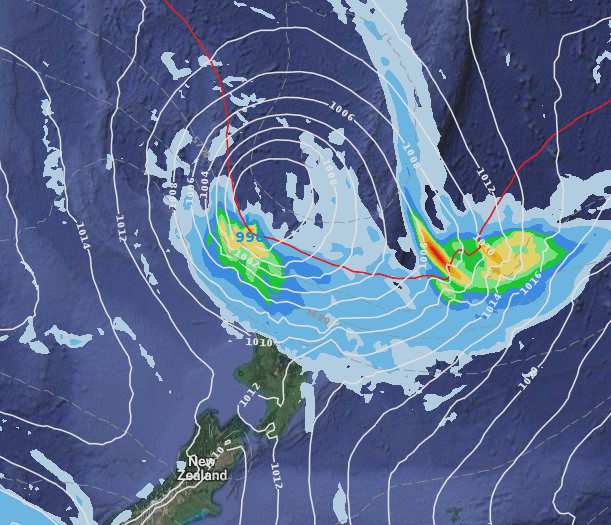 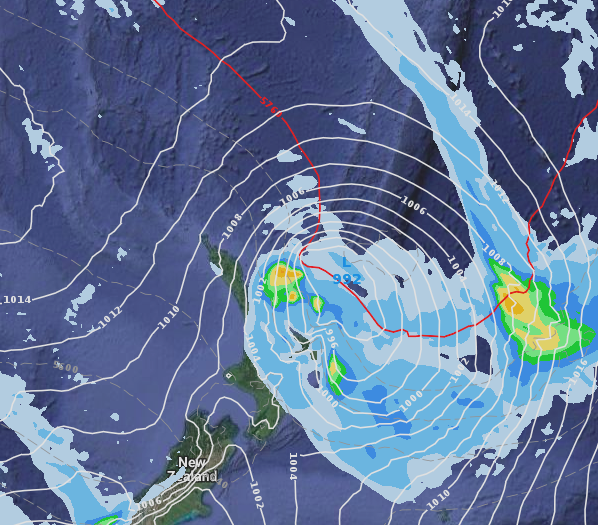 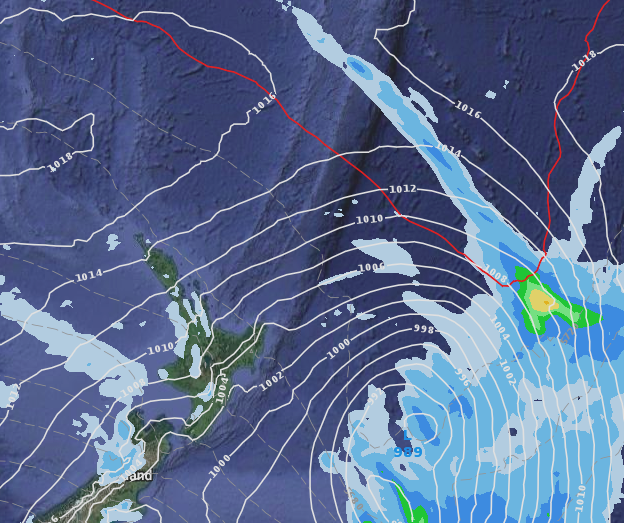 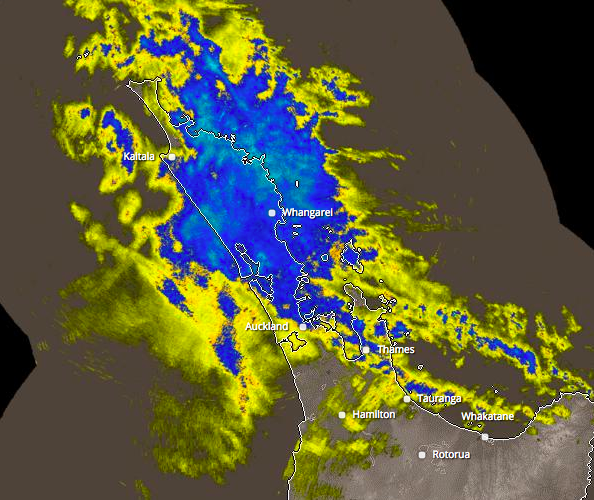 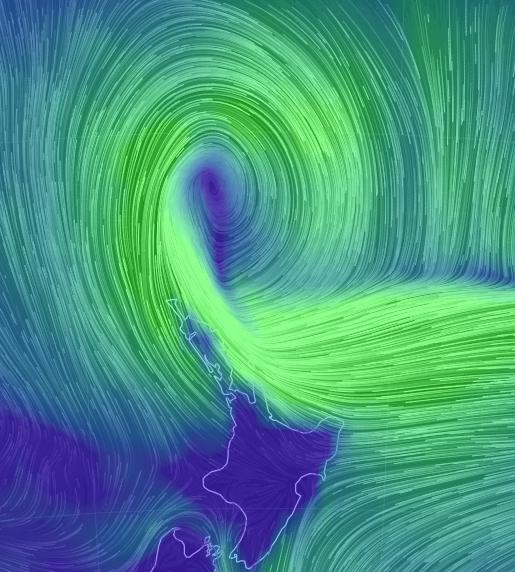 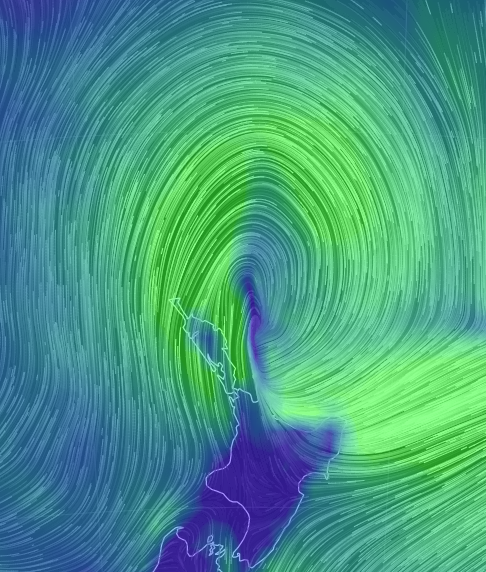 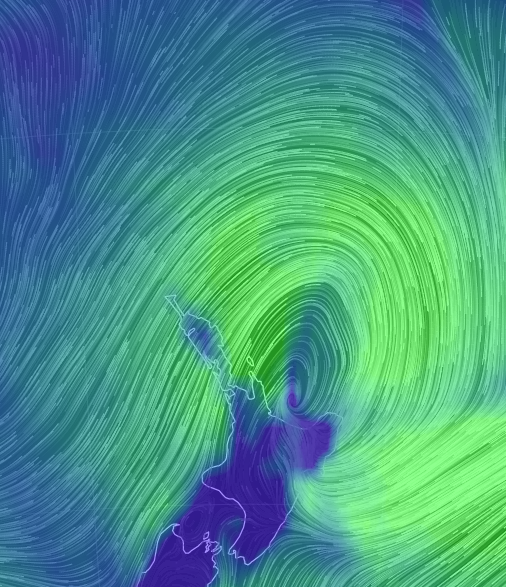 – 10pm Monday – The centre of Hola is losing its shape as it approaches eastern BOP/East Cape area. Strong southerlies come in behind it over Northland and Auckland. (Earth.nullschool.net)