Great weather in line for tomorrow 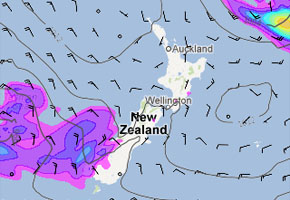 With a ridge lying over the North Island and a westerly airflow over the South Island most places are looking to be sunny tomorrow with light winds.

WeatherWatch.co.nz forecasters are predicting sunny weather for the North Island with a little cloud at times here and there, winds will be from the west or southwest along western coastlines and from the east or northeast along eastern coastlines, temperatures for most regions are looking to be up into the high teens perhaps low 20’s north of Auckland.

The South Island will have great weather also mainly in the north and east, northeasterly breezes may pick up a little on the east coast during the afternoon but shouldn’t be too bad. On the West Coast some cloud will develop during the afternoon with showers or drizzle patches developing about Fiordland, rain moves in there at night. Southland will experience thickening high cloud during the day with northwesterlies increasing.

Temperatures will get into the high teens for the east and north of the South Island tomorrow also however more into the mid teens in Southland and along the West Coast.