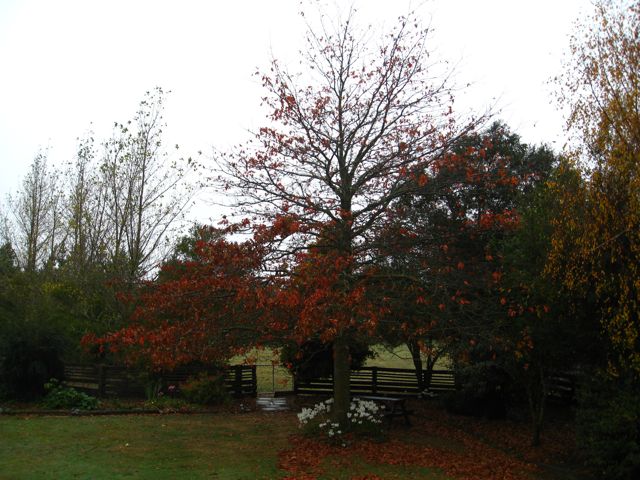 Wintry conditions have been noticeable in Christchurch over the last week with only Tuesday seeing some mild sunshine at one point.

Cold winds from the east and south have delivered showers, rain and hail on a few occasions with temperatures between 3 and 5 degrees below normal for mid Autumn over the last 7 days.

The first week of the school holidays haven’t been particularly bright however Easter is looking a little more promising with just one front likely to deliver moisture later on Saturday and also first thing on Sunday morning. A few drizzly areas or light showers could remain at times but also long fine spells.

Autumn colours are now very noticeable over much of the city and province but  leaves have blocked drains in a few areas causing  some surface flooding on one or two occasions over the last few days.

The second week of the holidays is set to deliver more settled conditions for Cantabrians with sunshine a prospect along with some cloudy spells and just a risk of drizzle.
Temperatures should be up a little overall on this week but overnight lows may drop further as clear skies, especially away from the coast, may see the mercury near zero.

A more autumnish day here in CHCH today with the sunshine out this afternoon. Although plenty of cloudy periods as well with NE freshening but that winter chill in the air has left us. I agree it looks to be a milder end to the week here until Saturday Afternoon with the prospect of 20 degrees on the cards. Even if it turned more NW on Saturday I think to get above 22 now would be a real good effort with the snow now on the southern alps making that NW a little fresher than normal.

In regards to next week, from a personal point of view I am seeing it as a more unsettled week rather than settled. The last couple of models runs show most of next week to be dominated by southerlies and light rain/drizzle all week with the chance of a low deepening off the coast of Canterbury mid next week bringing in some perhaps heavier rain. As we all know though it is a long way out and could easily change.

Last week saw flooding in some eastern areas from the 15mm or so rainfall that we received. We have been very lucky that we havent had any significant rain events, especially after the FEB 22nd quake. It will be very interesting to see how the drains and rivers cope with a significant event because surface flooding popped up last weekend from 15mm over a 24-30 hour period or so.

One last thing to finish on, it took me by surprise to realise that last year to this date we had 110mm at the local station where as this year so far 183mm. It must have been a warmer and drier summer because out summer this year seemed brilliant here!

Keep up the good work
Leighton

…models have been showing a rather unsettled next week for a few days now.

Yes I agree that the models have changed since this was published and its looking like the gloom will return!

Middle of this coming week looks fairly wet and this weekend appears drier than WW forecast. Warm in Christchurch yesterday and today has started very mild as well with warm temps again today.

Thanks for your comments