Home > News > Front to the south, disturbance to the n...

Front to the south, disturbance to the north – clear in the middle 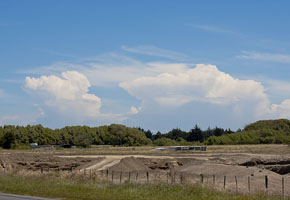 A disturbance to the north of New Zealand will spread some high cloud over the North Island today while a front to the south of the South Island is starting to make it’s presence felt with high cloud moving in there. Overall though it’s another cracker of a day around the country, the lowest temperatures around New Zealand are currently in Hokitika and Dunedin with around 17 degrees each so that’s not too bad.

Gisborne is off to a great start and is on 24 degrees although should get warmer still, as will many regions in the Upper North Island as will as the east coasts of both islands.

Since the unfortunate events on the 6th December we’ve had no thunderstorms around the country and looking into long range models it may stay thunderless right up till Christmas. I remember last year there were no storms around for a very long time then they developed right on Christmas Day inland near Fairlie due to afternoon heating.

Me being the avid storm chaser I would have loved to go after them but with family commitments on the day I couldn’t go out and just leave everyone, so I’m hoping we don’t have a repeat of that this year.

I’m hoping for a sunny Christmas for all, fingers crossed this cyclone when and if it finally drifts towards us comes and goes before xmas day up north. It could well deliver much needed rain on the east coast of the North Island and perhaps about Bay Of Plenty and Waikato so that is one positive, there is always the risk it could be too much in one hit and after generally dry weather could mean flooding as it may run off the ground quickly.

Something to keep an eye on.