Front moves in, warm out east 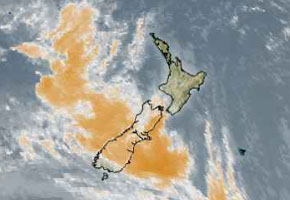 The forecast front is now moving slowly up the West Coast of the South Island delivering rain, heavy in areas. The rest of the South Island is cloudy, mainly thick high cloud although in Otago cloud will be a little lower as light showers look to be moving into the region. Southland looks to be dry for now however there may be a few showers later.

Christchurch had a little bit of rain this morning spilling over from the alps, typically we don’t get rain in northwesterly airflows over Christchurch but occasionally if systems are strong enough a bit of rain can come out of high cloud as it passes over. Temperatures are sitting around 12 or 13 degrees in most places but north of Timaru along the east coast it’s looking a bit warmer, temperatures now up in the mid teens, even a few 16 and 17 degree readings out there at the moment. Right on the Christchurch coastline temperatures are around 14 degrees but could pop up a little more if the northwesterly airflow arrives.

The North Island’s east coast has really got it made, warm temperatures and sunny skies although a little high cloud is getting into Wairarapa now. Temperatures are averaging 17 degrees at the moment so that makes a welcome change from when a week back it was claggy cloud and showers for what seemed a very long time.

Northland down through to Auckland and even parts of the Waikato are sunning up this afternoon, high’s in the mid teens. Cloudy areas still across other areas of the North Island with readings around 12 or 13 degrees, a few showers about Taranaki at the moment aswell and north to northwesterly winds are strong to gale force about Cook Strait at the moment.