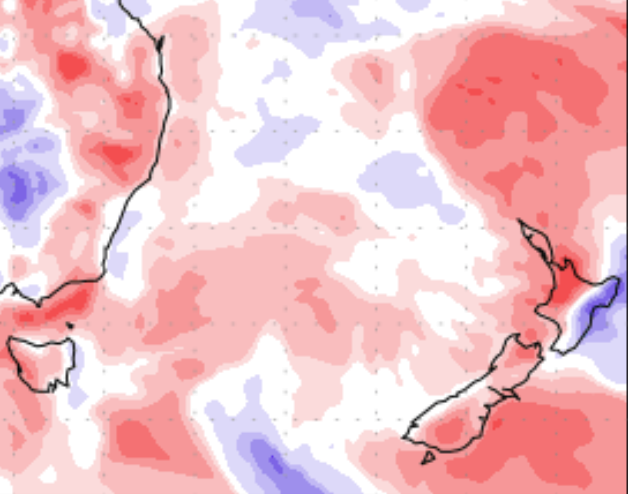 A front is pushing northwards over the South Island today on schedule, some heavy rain can be expected in the west as it moves through, this morning about South Westland then further north this afternoon. Nice warm temperatures in the east though with highs likely to get into the mid to late twenties. Christchurch has a high of 28.

A NEW DEVELOPMENT, LOW BRINGS RAIN TO THE EASTERN NORTH ISLAND NEXT WEEK

A low pressure system looks to hang around the North Island all of next week just to the northeast, it directs in a south to southeasterly airflow bringing an extended period of rain for the east coast. The exact ins and outs of this low will likely change a bit as we move forward but something to take note of.

Even the precipitation percentage of normal map has changed, basically red is drier than normal and blue is wetter than normal.

While the eastern North Island is looking a bit wet next week the South Island is a bit calmer, anywhere skies are clear the night before it will likely be a bit cold overnight Sunday on wards. We aren’t exactly into frost territory just yet but lows of 3 or 4 degrees in the mornings are possible.