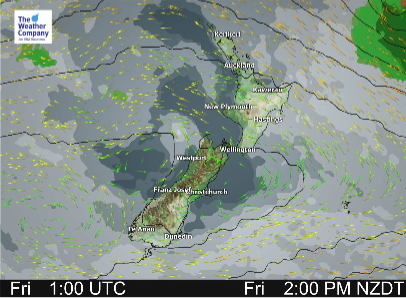 An anticyclone lies over the South Island today meanwhile a south to southeasterly airflow moving around this high flows over the North Island.

Most are dry today but there is the risk of a few showers for Hawkes Bay, Gisborne and Coromandel through to eastern Northland.

Temperatures are in the late teens or early twenties for most. Winds are mostly light.

Northland, Auckland, Waikato & Bay Of Plenty
A mix of sun and cloud, Northland may see a shower or two especially in the east. Southeasterly winds.
Highs: 21-23

Eastern North Island
Mostly cloudy with the odd shower for Hawkes Bay and more so Gisborne, the Wairarapa is dry with perhaps some sun especially in the south. Light winds tend southeast in the afternoon.
Highs: 17-19

Canterbury
Sunny for most however South Canterbury may see some cloud. Afternoon east to northeasterly winds.
Highs: 18-21

West Coast
A mix of sun and cloud, light winds tend southwest in the afternoon.
Highs: 19-23