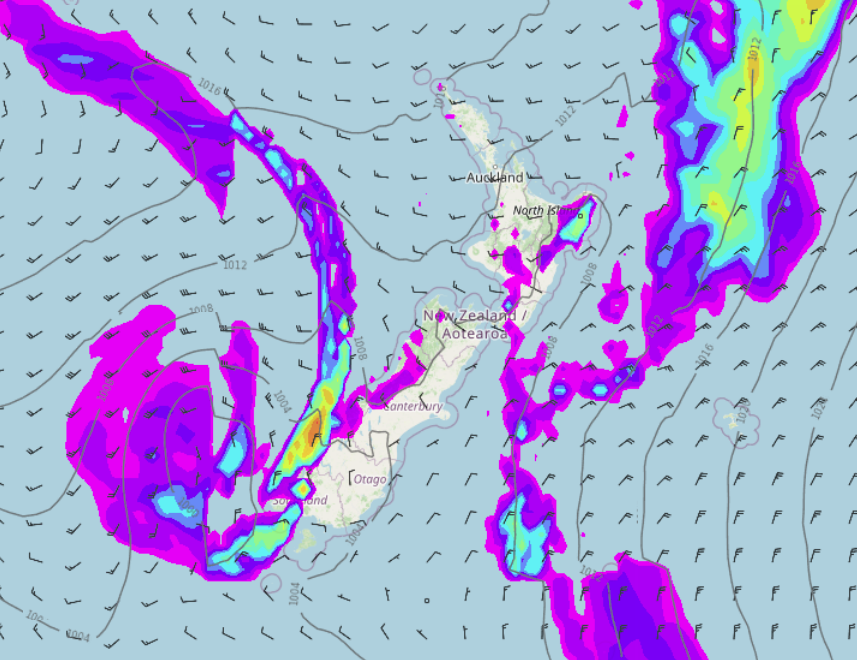 A front clears off to the east of the North Island this morning meanwhile another front pushes into the western South Island from around midday. A chance of unstable showers about the ranges of Hawkes Bay / Gisborne this afternoon.

Northland, Auckland, Waikato & Bay Of Plenty
A few morning showers clear, especially about Waikato and Bay Of Plenty then expect increasing sunny spells. Overnight a few further showers may move in out west as a front moves in. Southwesterly winds.
Highs: 18-22

Western North Island (including Central North Island)
Morning showers clear then sunny spells break through, chance of an isolated shower in the afternoon for Manawatu otherwise mainly dry. Overnight a few showers may push in as a front moves through. Northwesterly winds.
Highs: 16-19

Eastern North Island
Early showers then sunny areas break through, in the afternoon showers develop for Hawkes Bay and Gisborne especially in the ranges, showers may become heavy with thunderstorms then clearing in the evening. Light winds tend easterly around midday.
Highs: 21-22

Marlborough & Nelson
Mostly sunny, some high cloud especially morning then again later in the day. There may be a few early clearing showers for Nelson. Northwesterlies a little gusty after midday.
Highs: 19-22

Canterbury
Mostly sunny with some high cloud, northerlies tend northwest in the afternoon. Northwesterlies may become gusty in the afternoon for some inland areas and parts of North Canterbury.
Highs: 18-22

West Coast
Rain develops about South Westland in the morning then pushing northwards in the afternoon as a front moves through, easing evening as northwesterlies change westerly. Winds tend southwest overnight.
Highs: 13-16

Southland & Otago
Some sun and increasing high cloud, late afternoon / evening isolated showers develop, some may be heavy with a rumble of thunder. Overnight showers for most as northerlies change southwest.
Highs: 17-19