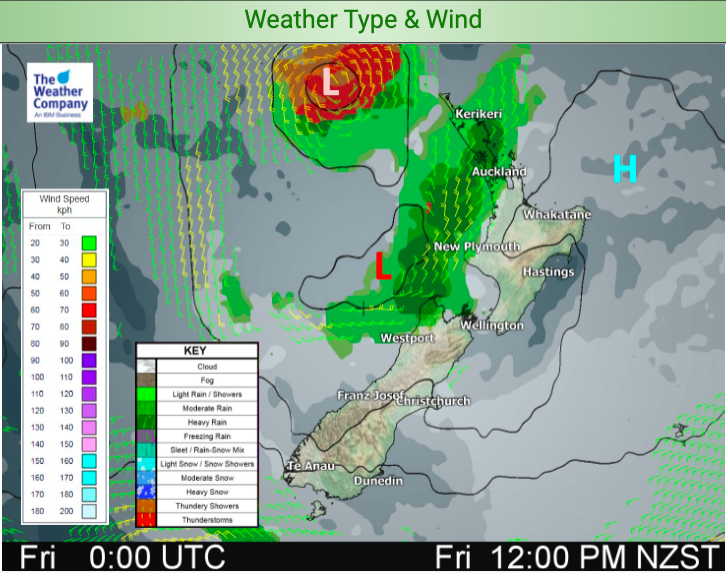 High pressure is slowly slipping off New Zealand today allowing for a very weak area of low pressure to drift in to the north encouraging more showers, drizzle and patchy rain.

This will affect the north west and western sides of both islands gradually today.

Northland, Auckland, Waikato & Bay Of Plenty
Mostly cloudy with an area of rain and showers around Northland and Auckland slowly drifting south. Winds mostly light, sometimes from the NE.
Highs: 13-18

Western North Island (including Central North Island)
Cloudy with light winds, drizzle or showers possible and a 50/50 chance it may turn to rain around Mt Taranaki for a time (or remain just offshore leaving the region dry – follow our hourly forecasts for more guidance) Light NE winds.
Highs: 13 – 16

Eastern North Island
A mix of sun and cloud with light winds. Cloudier the further south you go with late drizzle or showers possible. Light winds, perhaps from the northerly quarter.
Highs: 14 – 18

Marlborough & Nelson
Cloudy with showers or drizzle in the east, rain or downpours more likely on the Nelson side.
Highs: 13-14

West Coast
Showers, more likely the further north you go where it may turn to rain. Calm/light winds.
Highs: 13

Southland & Otago
Frosty for some inland with a fairly sunny day on the way. Light winds. Fog and mist patches possible too.
Highs: 9-13

Need to drill down further?? Visit www.RuralWeather.co.nz – it has the most weather data on earth for your local part of NZ!