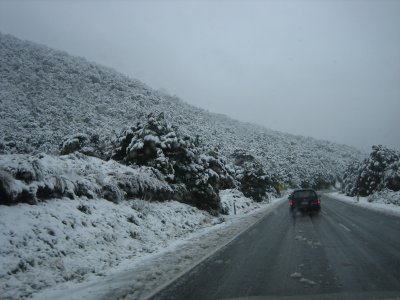 As we get geared up to take on this southerly storm the temperatures are set to plummet and icy winds will make it feel even worse.

The mercury will be almost single figures everywhere on Friday and some might struggle to make it above freezing in amongst blizzard-like conditions either late Thursday or Friday.

Christchurch is looking at 2 or 3 degrees as the high on Friday and Dunedin not much better – add in the windchill factor and the ‘feels like’ temperature dips below freezing.
Wellington at the end of the week could be as low as mid single figures with a snow flurry or two possible down to near sea level.

Although Auckland is likely to be a few degrees better off, 10 or 11 degrees for part of the week, will feel even colder in the wind.
Thunder and hail is also a possibility for a time for the city of sails.

Inland central areas of the South Island are expected to bear the brunt and it still sees decent snow could lie on the ground down to sea level.
Above 3-400 metres amounts could get close  to the half metre mark, especially in snowdrifts.

The first of the southerly surge is timed for the deep south later Wednesday and moving up the east coast during the evening and night. There could be a reprieve for a time on Thursday but late Thursday looks bleak at the moment.

Winds still appear to be most powerful across central New Zealand, especially Wellington and the Wairarapa.

Snow and rain totals will vary depending on location but there’s potential for this storm to be one of the most impactful in years in some exposed areas to the south and east and we’d rather forewarn than be conservative on this one.

Hi, Can you give an approximate time of arrival of this storm in to CHCH?

Depends which part of the storm you mean, the snow, the rain, the wind?

Rain will start off mid to late Wed morning. Snow is then possible from late afternoon Thursday but at this stage it’s debatable if snow will get to sea level now, if it does then a fair amount could accumulate about the city but if it doesn’t then it may just be quite wet and rain with snow sitting at about 200 to 100m above sea level. Further information tomorrow will help in coming to a better consensus on that one.

For most of Thursday southerlies are looking strong about Christchurch, possibly gale force about the coast.

I have to travel south on Tuesday/Wednesday of next week, specifically on the Desert Road on Wednesday. Any idea what the weather will look like by then? Likelihood of the Desert Road being open?

At this stage, Tue / Wed next week is looking all clear and you should be good to go 🙂

I have been reading lots of reports over the last couple of days with some people saying there won’t be enough rain to make alot of snow and others saying it will be the biggest snow event in 30 years. Soem saying it won’t get cold enough on the coast for a big snow dump.

What are you thoughts guys, do we know enough yet to confidently predict the impact of the event.

There is plenty of moisture.

The main thing we have to think about is how cold will the air get. The latest information has snow to sea level on a knife edge now in Chch but it would be worthwhile seeing further information tomorrow to make a better call on that one.

Inland parts of Canterbury are and still will be in the firing line for big snow amounts.