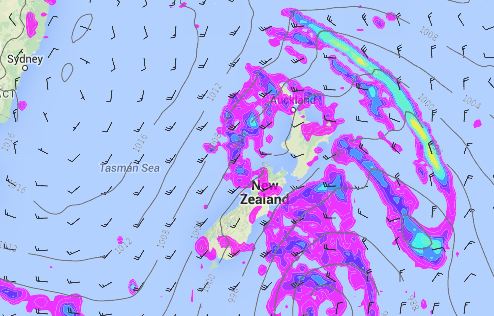 The country can finally breathe a sigh of relief tomorrow, as things are calming down a bit – though it won’t be for long, unfortunately.
A west/southwest airflow currently lies over the country, though the South Island can look ahead to a building southwesterly over the day.
Meanwhile, an anticyclone lies to the northwest of the South Island, in the Tasman sea.
North Island
The upper North Island can look ahead to cloudy periods, the odd shower in the morning and then an improving day as it goes on.
The same goes for the west coast of the island, as far down as Taranaki, though plenty of cloud will stick about through the whole day, with some brisk southwesterly winds.
For the Bay of Plenty, it’s looking similar, with a mixture of sun and cloud and the same southwesterlies.
Wellington and Wairarapa, meanwhile, can look forward to a couple of scattered early showers dissolving into sunnier spells, with south to southwesterly winds gusting and then easing as the day goes on.
Hawke’s Bay and Gisborne can expect much the same, as can Whanganui.
South Island
On the east coast, it’s looking good, with sunny areas and thickening high cloud, though northeasterly winds will freshen during the day near the coast, and strengthening as the day goes on.
Northwesterlies will take control late in the evening and should gust strongly overnight for inland areas.
Southland is looking at thickening high cloud, building northwesterlies and spits of rain in the evening, turning to steadier rain overnight. That rain will move in overnight for Central Otago, especially in the west.
And finally, on the West Coast, northwesterlies will freshen in the afternoon after a cloudy start to your Friday, while in Fiordland it’s looking wet, as usual, with drizzle getting heavier in the afternoon, and heavier still overnight.
– Aaron Wilkinson & Drew Chappell, WeatherWatch.co.nz
– Map: Google