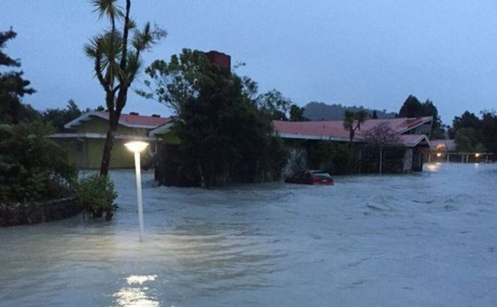 Close to 200 people have been evacuated in Franz Josef after the Waiho River burst its banks, causing the Westland District Council to declare a state of emergency.

At least 130 millimetres of rain fell between 11pm and 3am this morning.

“The river was actually flowing through the Scenic Circle Hotel. We heard reports of cars being moved around and tipped up in the carpark and then it’s gone through to the Top Ten Holiday Park which is actually a reasonable distance away.”

Thompson said several hotels had a lot of people in them seeing 60 staff and 10 tourists evacuated from the Scenic Circle Hotel.

“At one-fifteen [am] the water reached the Top Ten Holiday Park there were 100 tourist evacuated out of that and the Westwood Lodge there were a further sixteen evacuated.

“There’s about eighty tourists in the community hall and they’re being looked after down there by the local civil defence volunteers as well as Red Cross. Now we have declared a state of emergency, that means there’s a whole lot of resources that can be brought to bear”.

Thompson said 130 mL of rain fell in four hours, but the weather is improving.

Hundreds have been evacuated from Franz Josef after a West Coast river broke its banks https://t.co/nKIuec6gLC pic.twitter.com/c08PA8Ary6

“This morning it is expected to ease down to six and 12 millimetres per hour”.

Thompson said the water is up to a metre and a half deep inside the hotel, and they can’t pump it out.

He said Franz Josef water supply has been disrupted, and they’re not sure why.

Engineers are on the way to assess the disruption to the water supply, with residents advised to save whatever water they have left.

Red Cross has brought supplies to the welfare centre, where many tourists have taken refuge.

Houses are also being evacuated in the Nelson Tasman area.

A helicopter will go up at first light to survey the extent of flooding in the Tasman District.

The region has probably had the most rain in the whole countrywith 240 millimetres falling overnight and the rain’s showing no sign of easing up.

They’ve been a small number of evacuations in Riwaka.

Residents are being directed initially to the car park of the Riwaka Hotel.

A Civil Defence Centre is on standby in Motueka to be opened if required.

“[We’ve] got a crew from Motueka in attendance at the intersection of High Street and Wratt Street just assisting with flooding that’s threatening to enter some properties”.

State Highway six between Ross and Franz Josef has now reopened, but drivers are urged to drive with care.

State Highway 60 is closed at Riwaka, and between upper Takaka and Collingwood due to the flooding.

Police are assisting with a small number of evacuations.

“We had very heavy rain in Westland, Nelson, Marlborough, which is still going but it’s going to start easing there”.