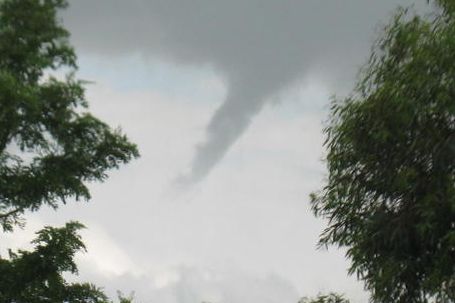 4:29pm — WeatherWatch.co.nz says a band of heavy afternoon showers has formed over the Hunua and Bombay ranges and are heavy enough to cause localised flash and surface flooding as they drift into Auckland city.

Similar showers this week have caused surface flooding across the Waikato.

Those most exposed to the heavy downpours are mainly in the south east, such as Howick – and mostly east of State Highway 1.

WeatherWatch.co.nz says some heavy downpours could affect the Southern Motorway and the eastern coastline as far north as the CBD in the next hour or two, before easing tonight.

There may also be a rumble of thunder in the south.

Meanwhile yet another funnel cloud has been spotted – again in the Waikato.

This photo was taken a short time ago by WeatherWatch.co.nz reader Sam Bearda.

“Funnel cloud spotted over Kaimai Ranges, on a SE’ly bearing from Waihou at approx 1630hrs today as a band of heavy rain, no wind, moved across from the west” wrote Sam Bearda on our website.

Manukau City had big cloud build ups, threatened for a while with a couple of showers but looked like it didn’t start developing further until moving on to Flat Bush, Botany, Howick and Pakuranga. Still waiting for a good lightning storm!