First confirmed casualties in Vanuatu; power out across the whole country (+VIDEO) 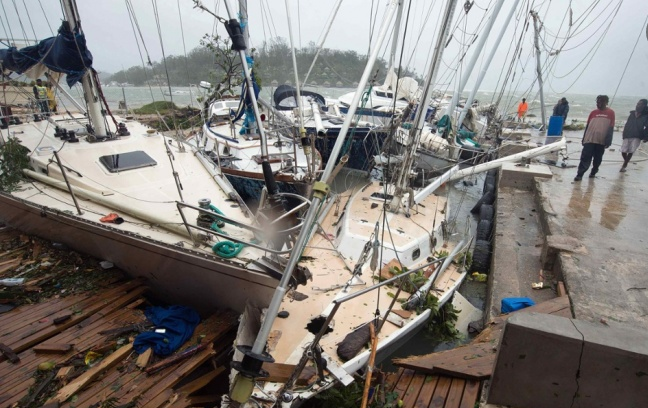 A tropical cyclone killed at least six people in Vanuatu, UNICEF said Saturday, confirming first casualties from one of the most powerful storms ever to make landfall.

Aid workers fear many more fatalities. The confirmed deaths came only from the capital, Port Vila

Only a little information has so far trickled out from areas outside the capital, but Sune Gudnitz, regional head for U.N. aid agency OCHA told CNN from Fiji, about 600 miles away, that he fears the worst.

“Unfortunately, the more that comes out, the worse it looks,” said Gudnitz. “I should say it’s really a case of the worst-case scenario for the country and for the people.”

His agency has had word of much destruction on Efate, the island that houses the capital, where Pam’s eye roared through, and from the southern island of Tanna, he said.

But many areas remain out of contact. And widespread wiped-out communications could indicate desolation.

Our team are on the ground in #Vanuatu where they spoke to Jaylene who sheltered a 1-week-old baby from #CyclonePam: http://t.co/xyh9SB2nlj

Pam had churned through the South Pacific with the might of a Category 5 hurricane before notching down to Category 4 after landfall at 11:23 p.m. Friday local time. CNN’s Weather Center said 155 mph (250 kmh) winds blasted the island nation.

There were gusts up to 200 mph (325 kmh). And the cyclone’s damage has stunned relief workers.

“Unbelievable destruction,” the Australian Red Cross called it, particularly in terms of human suffering. “Humanitarian needs will be enormous. Many people have lost their homes. Shelter, food and water (are) urgent priorities,” the aid agency said in a tweet.

The main objective now is to get disaster response teams into Vanuatu and kick-start the humanitarian operation, said Gudnitz.

But the airport in Port Vila has been damaged and it’s not clear when it will be able to reopen to allow relief flights to land. The U.N. aid agency hopes to get its first team on the ground with vital aid on Sunday, Gudnitz said.

Vanuatu’s remote location won’t help the international response. Port Vila is more than 1,100 miles northeast of Brisbane on Australia’s east coast, and some 1,375 miles north of Auckland, the closest city in New Zealand.

Until international teams can get in, it will be up to humanitarian agency staffers on the ground and the local communities themselves to do what they can among the wreckage.

Alice Clements spent the night cowering under the bathroom sink.

“But all what I could think about during that time is the people who might be literally clinging to coconut trees for their lives, and trying to hold on in those horrific winds,” the UNICEF spokeswoman said.

There’s no power in the whole of Vanuatu, Clements said, making it impossible for people to recharge their cell phones to call in. The water supply is also cut off, adding to people’s difficulties.

After Pam passed, World Vision emergency specialist Chloe Morrison took a drive around part of the island that is home to the capital.

“Port Vila looks like an absolute bomb has hit it,” she said. Images showed trees toppled to the ground, along with corrugated metal roofing strewn around like silver wrappers.

Trees blocked the path of Morrison’s vehicle. “They’ve fallen across in piles so high in some places you can barely see over the top,” she said.

Pam is the strongest storm to make landfall in the Pacific typhoon region since Haiyan raked over the Philippines in 2013, obliterating parts of Leyte.

It shattered homes and trees into match sticks, and killed more than 6,000 people.

Vanuatu’s capital may have been luckier than Leyte.

– Remember if you want to help UNICEF with the relief effort, donations can be made to their special Vanuatu campaign: