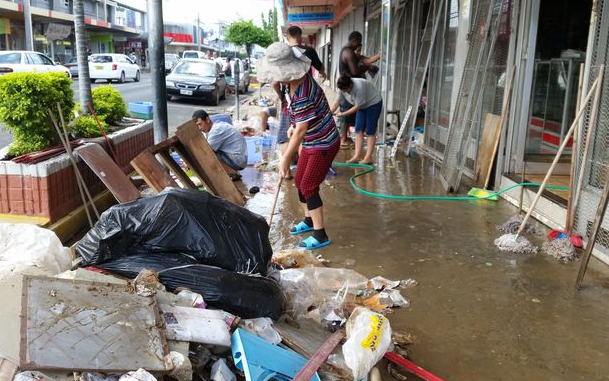 The cyclones and recent deluges have set business back by up to 10 years says a retail operator in Fiji’s hard hit west.

He said customers are coming in to buy replacement furniture for belongings damaged by the bad weather and spending is being boosted by the Fiji National Provident Fund cyclone assistance which people have been getting.

But Mr Reddy said productivity was down.

“The other main problem is that our staff as well, they are not able to come down and operate fully. We are not operating to the maximum since our staff are also affected by the cyclone. We need more time to recuperate” he said.

Shopkeepers are mopping up in the Fijian town of Nadi after a huge deluge of rain this week.

The busy tourist and business centre was inundated with water metres high racing down the main street and flooding shops.

Power was disrupted and the town closed as floodwaters rose quickly leaving people stranded and unable to cross in strong currents.

The floodwaters have subsided but Kishore Lal Raniga said the business he manages is already down several thousand dollars.

“It was heaps of mud, dirt and a whole lot of other things inside. It was really muddy. As much as we could we saved and the rest, it was in the water. It really put us in the soup and the whole country is under pressure you know.”

Kishore Lal Raniga said there was also pressure to open as soon as possible so more money isn’t lost.