Ex-TC Fili to race past North Is., damaging winds & flooding possible for some (+7 Maps) 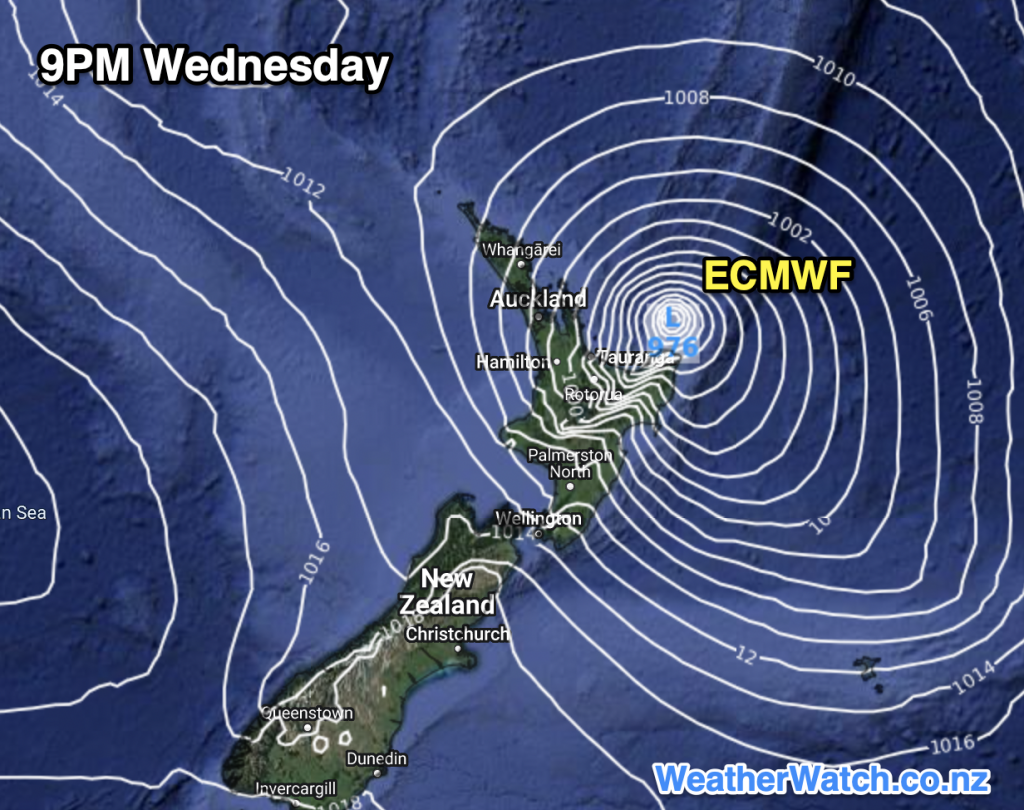 The low that was once a tropical cyclone is about to rapidly deepen again in the NZ area now that it’s ‘extra-tropical’ and, in particular, is expected to swipe the north eastern corner of the North Island around Wednesday.

Ex-Tropical Cyclone Fili will likely have air pressure down into the 970 hPa range when it moves in on Tuesday night and Wednesday. Landfall – which is when the centre of the storm moves over land – is not something all computer models agree on today, with some showing the centre very close to East Cape but remaining at sea.

Fili’s track should take it close to Northland, Auckland and Coromandel Peninsula – but the centre should remain out to the east at sea where the worst of the wind and rain will be. Fili will then track on Wednesday either directly in and over Bay of Plenty/East Cape area, or perhaps remain just offshore as it passes by Gisborne as an extra-tropical storm.

Fili is likely to track fast – moving in on Tuesday PM and exiting NZ by Wednesday night/Thursday morning.

SEVERE GALES:
Winds will be widespread around parts of the North Island but our mountains and ranges mean some areas will be quite sheltered, others more exposed. There will also be intense winds around the very centre of the storm, so the precise location of the middle of Fili will also be important (ie Bay of Plenty and East Cape are currently most exposed to these strong, potentially damaging, winds).

At the time of this update MetService was already issuing severe gale watches for the top of the North Island.

HEAVY RAIN / FLOODING RISKS
Heavy rain will spread across parts of the upper North Island with localised heavy falls and the chance of slips and localised flooding.

Parts of Northland and Auckland may get 50 to 100mm, while Coromandel Peninsula, BoP, East Cape/Gisborne and Hawke’s Bay have the chance of 150 to 250mm. It’s still too early to lock in a rain warning, but MetService will likely be issuing watches and warnings for rainfall across Monday and Tuesday with more specific details.

THE GLOBAL COMPUTER MODELS
All forecasters in the world use public global models from Government forecasters such as from Australia, UK, Japan, USA and Europe.

But in NZ, Government Agency NIWA has commercialised state funded assets so no open data modelling can be used for storms that actually directly hit NZ. NIWA uses these state funded assets for their own internal profiting, which is why we (and others) can’t include NIWA’s commercial-only modelling and instead must use the more reliable overseas modelling that is open access.

Here are three of the globe’s most trusted public weather models and their placement for Fili on Wednesday – we thank these nations for making data available to help better protect New Zealanders.

so the earlier ECMWF models were bit more accurate? that it will track more to the east where as the other ones had it most of north island taking a direct hit?

Hi there, yes so far it appears that way. Won’t know for sure until after it’s over, but our feeling for days now is that ECMWF was the most likely scenario. The updates on Tuesday morning will be critical.
– WW

Shame on you NIWA , Profit over people . You are no good to us and you should just