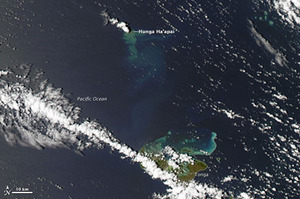 Hundreds of travellers and holidaymakers have been left stranded after flights to and from Tonga were cancelled yesterday because of a huge volcanic ash cloud 9km high.

Four Air New Zealand flights have been affected, including one from Auckland on Monday that had to be diverted to Samoa. About 600 Air NZ passengers have had their travel plans disrupted, including 300 in Tonga.

Tonga Airports chief executive Viliami Ma’ake said all flights to and from Australia, Fiji and New Zealand were cancelled because of the ash.

The Hunga Tonga-Hunga Ha’apai underwater volcano has had small eruptions over the past few weeks. But a larger explosion in the past few days has resulted in the massive plume of ash covering the area.

The volcano is about 63km north of the kingdom’s capital city, Nuku’alofa.

Aircraft cannot fly through volcanic ash because it can severely damage the engine, erode the fuselage and windscreen and clog the fuel system.

An alert has been issued by the Volcanic Ash Advisory Centre in Wellington and NZ’s Civil Aviation Authority is monitoring the situation.

Meteorological manager Peter Lechner said: “Looking at the advisory, they’ve still got an ash cloud extending from the southeast. From the ocean surface, the plume is up to 30,000 feet [9km] high.”

Air New Zealand is planning additional flights from today to accommodate passengers stuck on both sides – provided the ash has cleared.

A spokeswoman for Virgin Australia said a Sydney-to-Tonga flight was cancelled on Monday and a Tonga-to-Auckland one had to be called off yesterday.

The airline’s meteorologist was monitoring developments, she said. Additional flights from Sydney to Tonga and Tonga to Auckland were scheduled today.

Among those stuck in Tonga is Aucklander Andrew Allison.

He and a friend – both of whom are staying in Nuku’alofa with old schoolmates – have had two flights cancelled. They are due to come home on an Air NZ flight this morning.

Mr Allison said that, despite the cancellations, no one was complaining. “Personally, having two flights and potentially having more doesn’t bother us. We are both not due back at work until next week. Who would say no to an extended holiday?”

However, others have not been so lucky. Michael Keeling and Kristy McGregor of Manawatu have forked out around $3500 for extra flights, accommodation and food because of the eruption.

The couple had been holidaying in the Ha’apai group of islands – very close to the volcano – and their domestic flights back to the main island of Tongatapu were canned.

Mr Keeling is contracted to milk 340 cows, but has had to pay staff to do that for the extra time he and Ms McGregor are away.

Ms McGregor, a policy adviser, was due back to work on Monday but has had to reschedule meetings and explain to the boss.

“It’s something out of our control and we can only try and enjoy the extended holiday,” she said.

The Ministry of Foreign Affairs and Trade and GNS Science are now working together to help, following a request from the Tongan Government for expert assistance.

An Mfat spokesman said technical assistance was being offered in the form of two volcano experts. They would travel to Tonga to assess the volcanic activity and give advice – when they could get a flight.

Brad Scott, a volcanologist at GNS Science, said volcanic activity had been recorded for several weeks. He believed the volcano might have started beneath the ocean and grown until it reached the surface, essentially creating a new island.

But he said details of the eruption were unclear.

In 2009, a short-lived but powerful volcanic blast in the ocean created more landmass, Mr Scott said.

One of the things scientists want to establish is whether the latest eruption is related.