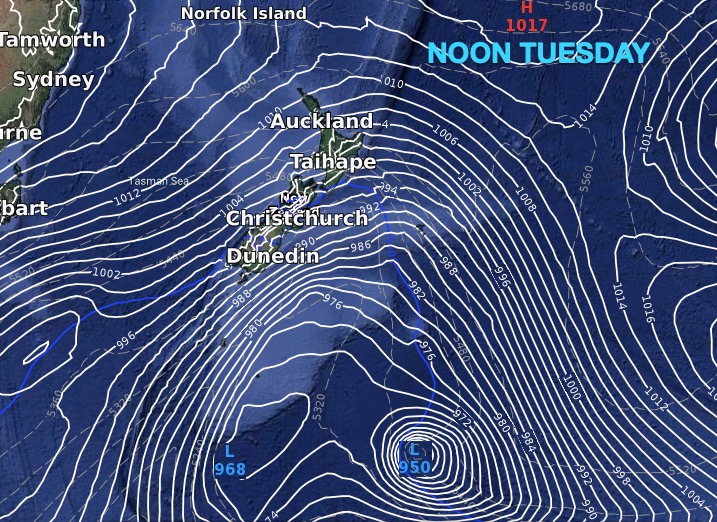 We’re still trying to work out the precise set up for Easter Weekend but it looks windier and much more unsettled than this weekend has been and this forecast poses a problem for the new normal in New Zealand – having to line up outside for food and drink.

As modelling continues to fine tune a very large pool of low pressure for Easter Weekend, WeatherWatch.co.nz says people should be prepared for queuing for food in poor weather conditions.

“It may not be severe for everyone but windy, colder and wetter weather is forecast for a number of days starting from this coming Wednesday, lasting over Easter Weekend and not easing until perhaps Tuesday next week” says head forecaster Philip Duncan. “Severe weather looks patchy but possible in both islands for a time”.

“Southern Ocean storms are different to tropical cyclones, they cover a much greater distance and that spreads the energy much further meaning many regions can have unsettled weather but it may not be severe enough to cause serious issues”.

Single digit daytime highs are forecast for some southern regions while gales could, off and on, impact as far north as Auckland from Thursday to Easter Monday.

NOT ALL HAVE BAD WEATHER!
The angle of the winds and the fact that the centre of this storm should be well south of New Zealand (half way between Antarctica and Southland) means not all have bad weather. The mountains and ranges will make for mainly dry and sunny skies in eastern areas of both islands (but windy at times).

There may also be some sunny, calmer and drier weather to still get outside for fresh air or a walk around the block or farm.

It’s too early to work out severe weather risks for NZ but some places could have severe gales (South Island, Cook Strait, maybe Auckland), snow is likely to be heavy in the South Island ranges and mountains for a time and heavy rain is forecast for the West Coast. Squally showers are likely along the western coastline of both islands.

This update today (Sunday) has backed off somewhat from Friday’s update due to the modelling pushing the centre of the low a little further off the southern NZ coastline. Modelling a week out is always going to change and we expect more changes in the days ahead but hope to be more locked in on Monday and Tuesday about any potential severe weather impacts for NZ.

WEIRD SET UP FOR FORECASTERS – AND SUPERMARKETS
Usually a big low at Easter would ruin outdoor events, impact travel plans and mean extra warnings for campers and trampers. However with New Zealand at Covid-19 Alert Level 4 many of us are at home and a bit of windy, wet weather for a few days may not be too problematic.

The main message we want to get out is that for Essential Workers we have some adverse weather coming in.

Some supermarkets may want to rethink the way their customers currently line up, especially those more vulnerable, if cold wet and windy weather is forecast to linger for a number of days. This Southern Ocean low may lead the way for more unsettled Autumnal weather as we slide towards Winter too.

No to both questions.

Nelson should be ok, may be a little wet on Sunday. Keep up to date here: https://www.weatherwatch.co.nz/forecasts/Nelson,%20Nelson

Your service is so invaluable when big events are on the cards, as it gives us ample warning. Many thanks again Phil and team.

Easter and bad weather is like bacon and cheese though not as enjoyable.
I’m sure the good people of NZ won’t let the vulnerable stand outside in hail showers or be blown about. We’re not like that.

Peter left a comment about the lack of tropical rainmakers. It was only a couple of years ago the media were calling two tropical cyclones in succession the ‘new normal’ for NZ’s summer. One of those would be good now!
Also happy to report on Australia’s dry spell but not on Sydney’s wettest summer in 30 years when it breaks. Is it something about good news not selling?

I’m looking forward to the first proper cold breeze of the year and Weather Watch’s coverage. Thanks!