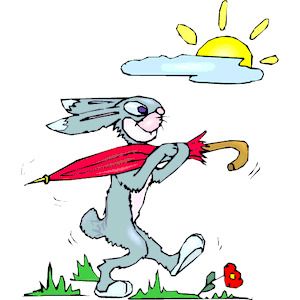 In a round about sense this coming Easter is unfortunately looking messy weather wise, however with New Zealand being the way it is, various wind flows will have different impacts on different regions. Meaning sunny weather at times for some and cloudy rainy weather otherwise.

Farmers are certainly looking for wet weather so it will be a blessing for many from Northland down through to the Manawatu, infact the wettest weather for the country comes just before Easter on Thursday as what will be ex tropical cyclone Ita moves down from the Queensland coast into the Tasman Sea just west of New Zealand. Weâ€™ll talk about Ita more in tomorrow mornings 7am story so keep an eye out for that one.

So for Easter Friday â€“ The upper North Island has northerly quarter winds with humid warm temperatures, expect cloudy areas but the odd sunny break is possible too. Isolated showers about, mainly in the afternoon. Morning showers clear about the lower North Island, northerly quarter winds once again. The weather clears up for a mostly sunny afternoon on the east coast, about
Taranaki through to Wellington a few showers move in during the afternoon
however.

About the South Island the wind flow is easterly for all with reasonably breezy to brisk winds. Expect rain with heavy falls from the top of the south right through Canterbury. Conditions ease about Otago but will still
be wet, then Southland and South Westland looks dry but cloudy. North Westland
and Buller look cloudy with occasional rain. Fiordland in this situation looks
to be the best place in the country weather wise.

Saturday is a tale of two halves, a northerly airflow lies across the country. In the west showers are
likely with a few sunny spells about too, but still expect plenty of cloud. The North Island may see thunderstorms in the afternoon. For the east coasts of both islands the weather looks mild and sunnier.

Sunday sees a front move over New Zealand, it doesnâ€™t look particularly strong at this stage but showers and
cloud can be expected for the west of both islands with precipitation being more
persistent for the west of the South Island. The North Islandâ€™s east coast does
well with sunny conditions. It will start out ok for the South Islandâ€™s east
coast however a southwest change will move northwards bringing some cloud and a
few showers.

Monday is a while away so we wonâ€™t go into too much detail but suffice to say an anticyclone moves into the Tasman Sea with an easing southwesterly airflow over the country, showers clearing for most areas with
sunny spells increasing. Temperatures will not likely be very high.

Heading to the Coromandel on Thursday for the weekend – what can we expect, will we see some sun?

Thursday looks very wet, lots of rain with heavy falls. However in the evening it clears away fairly quickly.

Friday and Saturday see sunny spells and periods of cloud, a few isolated showers about mainly afternoon. Chance of a heavy fall and thunderstorm during the afternoons.

On Sunday expect westerlies with sunny periods and some cloud, a brief shower or two may move through in the afternoon.

Hi,
Going camping at lake Rotoma for Easter through to Anzac Day, what can we except from the weather

Can tell you from about Friday 18th till the 22nd but beyond that is getting a bit far away.

On Sunday expect sunny spells and northwesterly winds, a few brief showers move through in the afternoon.

For further info click on the “maps” link above then go to the rain maps.

May be a bit wet. Saturday looking like rain will spill over from the west at times during the day with northwesterly winds. Dry spells may come into play during the afternoon.

For further info click on the “maps” link above and check out the rain maps.