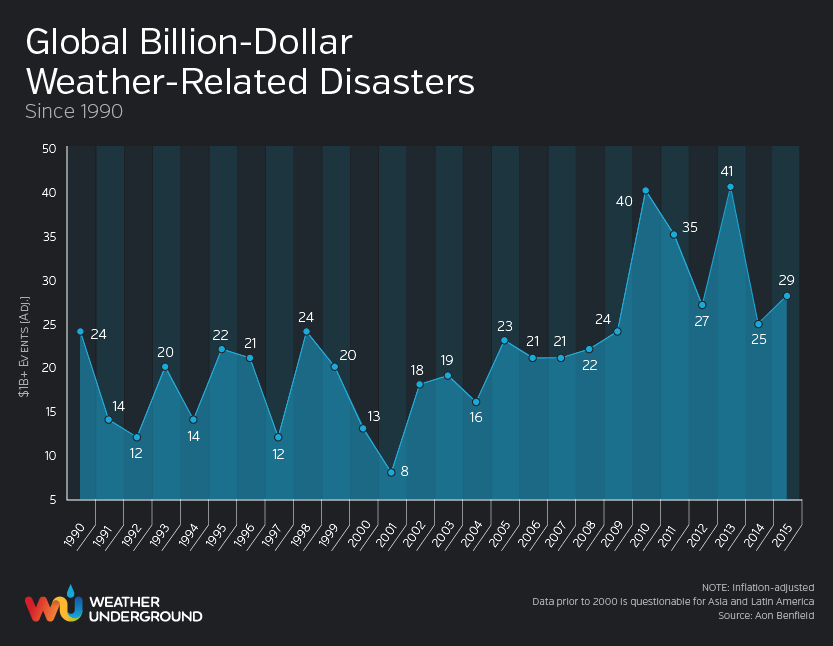 Earth had a tough year for billion-dollar weather-related natural disasters in 2015, with 29–the fourth most since accurate accounting began in 1990, said insurance broker Aon Benfield in their Annual Global Climate and Catastrophe Report issued last Wednesday.

The lack of landfalling U.S. hurricanes contributed to the relatively low damage total.
Natural disasters (including earthquakes) killed approximately 19,500 people in 2015, which was 75% below the 2000 – 2014 average of 79,000 fatalities.
The deadliest weather disaster of 2015 was the May heat wave in India that killed an estimated 2,500 people; the costliest weather-related disaster was the $16.1 billion fires/drought in Indonesia.
The U.S. had the most billion-dollar weather disasters of any country, with eleven; China came in second, with six.

South Africa suffered $2 billion in damage from a devastating drought in 2015. South Africa’s previous most expensive disaster was the $1 billion cost (1990 dollars) of the 1990 drought.

Malawi had two weeks of heavy rain in January that triggered rampaging floods that killed at least 176 people and cost $430 million, 10% of their $4.3 billion GDP. The previous most expensive disaster in Malawi’s history was $24 million (in 1991 dollars) from the floods of March 10, 1991.

Vanuatu was struck by Category 5 Tropical Cyclone Pam on March 13, 2015, killing 16 people and doing $433 million in damage, about 53% of their $815 million GDP. The only comparable disaster in Vanuatu’s history occurred in January 1985 when twin Category 3 storms–Eric and Nigel–battered the nation, doing $173 million in damage.

Chile suffered $1.5 billion in damage from flooding in late March 2015. This beat out the $1 billion price tag of their previous most expensive weather-related disaster, a cold wave in 2013.

Dominica (population 72,000) experienced a catastrophic deluge on September 27 from Tropical Storm Erika that caused $300 million in damage–57% of their GDP of $524 million. Dominica’s previous most expensive disaster was the $175 million in damage from Hurricane Marilyn of 1995.

Botswana had drought that cost $44 million in 2015; the previous most expensive disaster was $5 million in flood costs from a February, 2000 flood.

In the U.S., there were eleven billion-dollar weather disasters in 2015, according to Aon Benfield.
NOAA’s National Centers for Environmental Information (NCEI) gave a lower number: ten (Aon Benfeld rated the severe weather outbreak from December 23 – 26 as costing a billion dollars, while NOAA did not.) NOAA’s ten billion-dollar weather disasters of 2015 marked the 4th highest yearly total for the U.S. since 1980. The ten-year average is eight. Billion-dollar events account for roughly 80% of the total U.S. losses for all weather-related disasters.

For a record eighth consecutive year, U.S. severe weather damages in 2015 topped $10 billion, according to an analysis by Munich Re, the world’s largest reinsurance firm. “No year prior to the 2008-2015 period had insured thunderstorm losses been in excess of $10 billion,” said Mark Bove, a Munich Re research meteorologist.

From – American Society of Civil Engineers by Shalini Mohleji and Roger Pielke Jr. 2014 – losses can be explained entirely by socioeconomic factors in each region such as increasing wealth, population growth, and increasing development in vulnerable areas. On climate time scales, societal change is sufficient to explain the increasing costs of disasters at the global level and claims to the contrary are not supported by aggregate loss data from the reinsurance industry.

From – Prof. John McAneney Managing Director Dr. Ryan Crompton Chief Research Officer, Risk Frontiers, Macquarie University Australia 2014 – It is a widely held view that climate change arising from human activity is increasing the cost of natural disasters. This perception is false.While it is undeniable that the economic cost of natural disasters is rising rapidly, it is doing so because of growing concentrations of population and wealth in disaster-prone regions. So far studies of long-term insurance or economic disaster loss histories caused

Interviewer:  How has the latest rise of extreme weather events changed the calculus on Ajit Jain in reinsurance?

Warren Buffett: “The public has the impression, because there has been so much talk about climate, that the events of the last ten years have been unusual. …They haven’t. We’ve been remarkably free of hurricanes in the last five years. If you’ve been writing hurricane insurance it’s been all profit.”

Warren Buffett: “So far the effects of climate change, if any, have not affected… the insurance market. It has made no difference. I calculate the probabilities in terms of catastrophes no differently than a few years ago… that may change in ten years.”

Warren Buffett: “I love apocalyptic predictions, because … they probably do affect rates…”

Warren Buffett: “Writing US hurricane insurance has been very profitable in the last five or six years… now the rates have come down and we’re not writing much, if anything, on Hurricanes in the US at all. The biggest cat risk right now.. I think is earthquakes in New Zealand.”