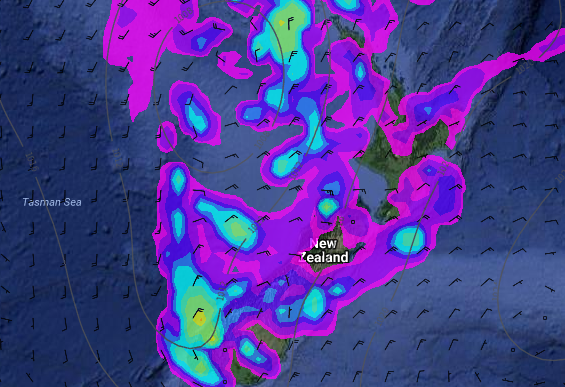 UPDATED 12:57pm — Downpours are developing and spreading south today as a low in the Tasman Sea helps feed a humid sub-tropical airflow over parts of New Zealand.

Sunday afternoon will see large dry areas in the upper North Island but downpours in Northland should spread further into the Auckland region.

The low isn’t bringing one big band of rain. Instead it’s bringing lines of slow moving downpours that are narrow but intense – with large dry areas around it. Also isolated showers are popping up here and there.  It means even within each region you can have big downpours but dry spells too. This also explains why, in some cases, there is a high % of rain even if it’s still dry at your place.

Downpours will spread across Northland and Auckland today, setting in to rain for some areas.

Thunderstorms are possible in the Far North and some parts of Northland today.

As Sunday wears on the chance of downpours increases but Waikato and Bay of Plenty may be mainly dry.

The low that is moving towards New Zealand is very slow moving, almost stalled, which is why it’s taking such a long time for downpours to develop for some people.

To make sense of it all we strongly suggest you track both the rain forecast maps we have at WeatherWatch.co.nz and the rain radar which you can find at MetService.

Some downpours may be intense later, thanks to the sub-tropical element.  However others may only get a few spits, as is the nature of this low.

Across New Zealand there are many showers, drizzle patches and small areas of rain today – also a lot of cloud and dry spells too. The South Island has also been affected by some wet weather thanks to this low but dry spells are increasing in places like Canterbury this afternoon.

Heaviest rain in the next 24 hours will likely be in pockets across the Upper North Island and the South Island’s West Coast.