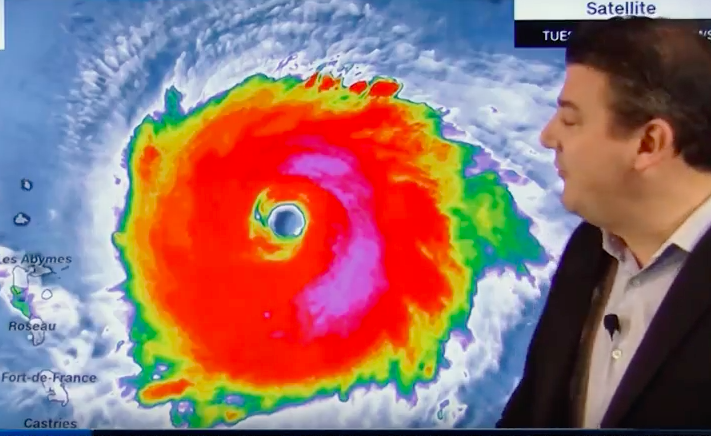 We have a double record today, an in depth look at the typical spring blast of weather around New Zealand plus we extend on and cover historic Cat 5 Hurricane Irma as it churns in the Atlantic Ocean with 300km/h winds sustained and is aiming for Florida.
But first, New Zealandâ€™s dealing with thunderstorms, isolated tornados and heavy downpours as big westerly blast of spring weather moves in. Temperatures will drop over the next few days with a colder weekend for many regions.
The bulk of the wet weather will be in the west of the country this week, then the North Island on Saturday (and western areas of the South Island) before a southerly crosses much of New Zealand on Sunday and Monday.
Snow is likely on the Alpine passes this weekend.
Next week things warm back up again and calm down – well, to some degree. It is spring afterall.
After the New Zealand forecast we then take an in depth look Hurricane Irma – where she lies now and why Florida and the United States is again on high alert.

News reports suggest that as on 5 September 2017 , Atlantic hurricane IRMA , which has strengthened to category 5, seems to be roaming somewhere in northern Caribean. The opinion is that present is too early to say which place in US it may or may not make landfall. But it is being estimated by experts that Domnican Republic and some parts of Florida in US could also be touched by the powerful hurricane IRMA in days to come shortly. This Vedic astrology writer had indicated some States or major regions in US which may probably have alert for more care and appropriate strategy against “ hurricane like natural disasters” in August- September 2017. These alerts of September 2016 last in article – “ Astrological probable alerts for US in 2017” – were published last year in December 2016 in wisdom-magazine.com from US. Such like one or more vulnerable regions or States in US as Miami , Maine, Missouri, Detroit , Tennessee or Texas were alerted through the article. On a later thinking , Dominican Republic was also included for alert about four months past from now against such natural disasters through a process of emails to numerous news media across the globe. So while alerts said before were expected to prove meaningful in guiding the regions and States , no certainty is claimed because human efforts and strategies meanwhile also play role and further that such conclusions can have probably error or slip.