Dead whale washes up at Paraparaumu 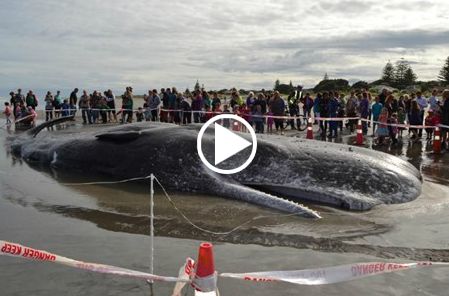 The massive sperm whale which washed up on the Kapiti Coast last night will be cut up into pieces today and buried at a secluded part of the beach.

The 15-metre long marine mammal was discovered at around 6:30am in front of the Kapiti Boating Club on Paraparaumu Beach, and hundreds of locals have flocked to see it.

It has been fenced off to protect it from onlookers, many of them children, eager to snap a photo with the new addition to the beach.

A local kaumatua blessed the whale this morning. The jawbone and teeth will be removed this afternoon and given to the local Te Atiawa iwi.

An animal autopsy – called a necropsy – will not be performed on the mammal.

Scientists at the scene say it is most likely a mature male sperm whale, based on the scarring on it head and the wearing of its teeth and could be around 60 years old.

Department of Conservation staff are at the beach and a spokesperson says the rest of the whale will be cut up in sections and buried at the secluded, less busy part of the beach.

They say it is too big to bury as one piece.

It is understood the whale died overnight but it is not known if the death occurred at sea or after it stranded on the beach.

Residents say the whale wasn’t on the beach last night and could have come in with the high tide at around 1am today.

Whale stranding organisation Project Jonah is at the beach, along with Kapiti Mayor Jenny Rowan.

The next high tide it expected just before 2pm but waves are currently splashing over the whale.

Sperm whale can live up to 65 years old, can hold their breath for up to an hour and can dive down to 2000 metres deep.