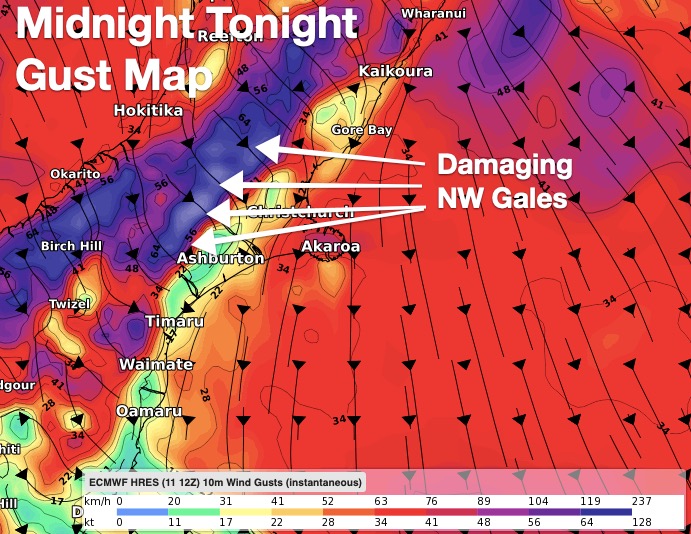 A burst of damaging north west winds is developing over inland Canterbury today and tonight, mostly from the mountains to the foothills and the nearby plains.

Below are the wind gust maps showing the severe gales developing across today and peaking this evening and overnight for many places. The windy weather moves northwards overnight and into the lower North Island on Monday, but the overall peak winds do ease back across Monday. This means the lower North Island will have severe gales return, but hopefully not as intense as they were just on Friday.

Inland Canterbury is the main focus today and tonight as the North West severe gales build – but they should ease on Monday morning with a calmer change (comparatively speaking) from the south moving in. While gusts of 160km/h are forecast, we may see gusts over 180km/h in more extreme exposed parts of inland Canterbury tonight – like we saw in Wairarapa on Friday. One positive is that severe gales look less likely to make it as far east as Christchurch from this event – although northerlies may gust to gale in the city tonight for a time.

The windy weather over the past week has been caused by spring westerlies, which do ease this coming week, but for some regions westerlies will be replaced by windier easterly quarter winds due to a low moving into northern NZ later this week creating – you guessed it – more pockets of gales.

To drill down deeper – please visit www.RuralWeather.co.nz for hyper-local wind data and graphs (powered by IBM).