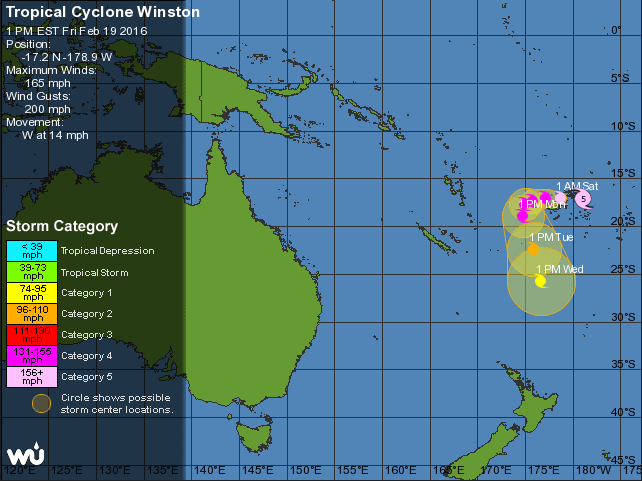 A severe category 5 tropical cyclone is expected to cause significant damage as it hammers Fiji. Here’s what you need to know.

1. Winston is the biggest storm in the world right now
As far as storms go, Cyclone Winston is undoubtedly a monster of potentially destructive power. WeatherWatch head analyst Philip Duncan says it is the biggest and fiercest storm in the world right now. “I don’t think there’s anything else around that’s as big as this one, or as aggressive as this one.” Meteorologist Dr Jeff Masters said it was the strongest storm ever to threaten Fiji, according to Weather Underground.

2. It has already slammed Tonga, and could be stronger when it hits Fiji
The cyclone wreaked havoc when it hit Tonga, destroying 10 homes and damaging a further 200. More than 2500 people were evacuated. Now, it has made a u-turn back towards Fiji and could be even more destructive, with the Hawaii-based Typhoon Warning Centre predicting maximum sustained winds of 295km/h and gusts of up to 360km/h.

3. It is bearing down on Suva, which doesn’t get direct hits from cyclones often
The Fiji Met Service is predicting the storm will be centred about 130km north-north-east of Suva about 7pm today (8pm NZT), and 140km north-west of the capital about 7am tomorrow. The US National Oceanic and Atmospheric Administration said it was rare for cyclones to hit the capital, with only 12 of at least category 1 intensity tracking within 160km of Suva since 1972. The most recent was four years ago.

5. Aid agencies are bracing for the worst
In Fiji, agencies have emergency supplies at the ready should the nation be badly hit. Some islands have been evacuated, road curfews are in place and seafarers have been warned not to take to the seas. Meanwhile, New Zealand has already pledged $39,000 to help Tonga in the wake of the storm. Aid agencies there fear the cyclone may help to spread the Zika virus.

6. Flights are being cancelled and delayed
Virgin Australia has suspended services between Nadi and Melbourne, Sydney and Brisbane today and tomorrow, and Monday’s flights are under review. Many of Fiji Airways and Fiji Link’s international and domestic flights have been cancelled or delayed by up to eight hours. The two airlines are waiving fees for anyone who bought tickets on or before yesterday for flights until Thursday.

Air New Zealand has cancelled all its five flights in and out of Nadi this evening and tomorrow due to the severity of the storm. The airline said it is continuing to monitor the situation and will decide tomorrow afternoon whether two flights on Monday will be cancelled.

People who bought tickets before and including Thursday, for flights to Fiji, Apia, Niue and Tonga scheduled prior to and including Tuesday can defer or bring forward the trip up until Monday, February 29 without penalty. Or if the proposed date of travel is unknown, then the value of the ticket may be held in credit for payment towards travel within the same 12-month validity, Air New Zealand said on its website. And normal refund rules apply, non-refundable fares remain non-refundable.

7. Kiwis are urged to let families know they’re safe
New Zealanders in Fiji are asked to register at www.safetravel.govt.nz and to contact their families. Anyone with concerns about a New Zealand citizen family member in Fiji should try to make direct contact with them first. People with ongoing concerns should contact the Ministry of Foreign Affairs and Trade on (04) 439-8000 from within New Zealand or +64-4-439-8000 if calling from overseas.