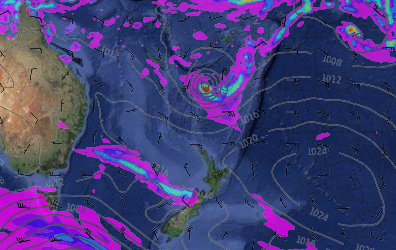 Severe Cyclone Winston continues to churn north of New Zealand near Tonga and Fiji and today has been upgraded from Category 3 to Category 4 with winds gusting well over 200km/h.

Over the next day Winston my reach the highest cyclone category, Category 5 – and the Fiji Meteorological Service agrees.  This would put winds sustained well over 200km/h with gusts closer to 300km/h.

Winston is a major storm and poses a direct threat to the small islands around Tonga.

Cyclone Winston’s slow return towards the New Zealand direction means the storm will track closer to Suva, Fiji than it did at the start of this week. 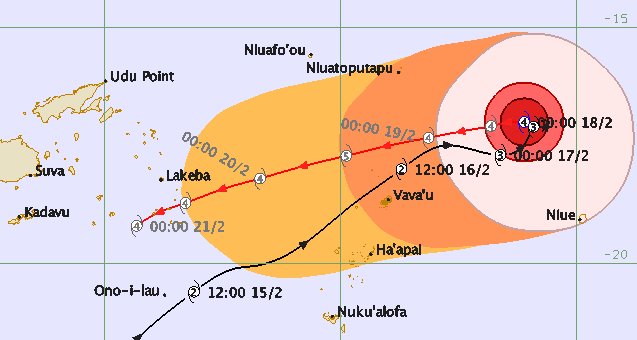 THE FUTURE OF WINSTON
Don’t ask – that’s our first comment! The computer models that are normally great at picking future paths, have, to be honest, been awful with Winston. They have several times picked outcomes that have not happened, and yet again today they are all saying different things.

It’s quite likely Winston will remain north of New Zealand due to a stream of blocking high pressure streaming over New Zealand itself from the Tasman Sea. Various models show either way Winston may weaken as it returns to a more northerly position to New Zealand.  At this stage we are not focused on Winston’s impact on New Zealand – rather it’s track past Tonga and Fiji because long range modelling with this particular storm are not overly reliable.

Once the storm has tracked past these island nations – by the end of the weekend – we’ll be much clearer on whether Winston will ever drop south as a storm, or simply fall apart to our north.

We don’t just rely on the models – other data, past experience and discussions with our own team play a huge part in our forecasting, but for now there is simply just too much uncertainty across all model and data sets to lock anything in.  So…as we’ve been saying for over eight days now: Watch this space for updates on Severe Cyclone Winston.

– Homepage image – The wind/rain map for one week from now (Next Thursday) via Weathermap.co.nz

I commented a couple of days ago how elusive this cyclone is.

In fact in all the time I have followed weather in a serious way I have never seen such a wide variance in the predicted track. They are generally in rough agreement.

I have even seen a prediction for him to head to Australia! The highs will determine the outcome of course so the timing of those will be interesting.

If he does come this way he will sure pack a punch even if in a weakened state.

Good luck with the forecasts