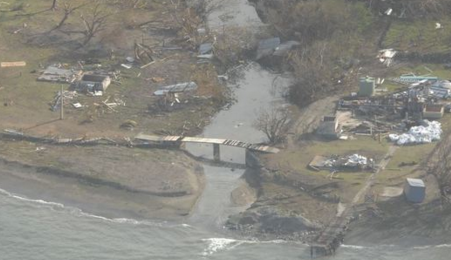 Fiji’s national curfew will be lifted today and all public transport services will resume – but the clean-up is just beginning for the island nation that was slammed by a category 5 cyclone over the weekend.

Up to 10 people are believed dead and a further seven are missing at sea after Cyclone Winston struck, according to latest reports from the Fiji Broadcasting Service.

The new agency said the Government had confirmed 10 people had died in the western division as a result of the cyclone.

Two of the dead drowned during storm surges and four were killed after being hit by flying debris.

One man died after his house collapsed on top of him.

Fears were held for seven fishermen from the Yasawa Islands who were reported missing at sea.

They had gone out on Friday and had not been heard from since.

More than 4000 people were staying in 68 evacuation centres throughout Fiji.

Tourists and locals tried to stock up with supplies in advance. Windows were boarded up and foreigners hunkered down in hotel rooms. But the cyclone – with gusts reaching 325km/h – ploughed through, ripping roofs from buildings, tearing trees and power poles out of the ground and leaving a trail of destruction.

Lower Nadi town was last night closed due to extensive floodwaters and roads blocked by landslides.

An elderly man reportedly died on Koro Island when a roof fell on him but there are few details about the others who have died or how many have been injured.

A landslide left in the wake of the cyclone. Photo: NZDF / Fijian Government / Facebook

Evacuation centres have been set up and New Zealand relief teams mobilised but aid workers told the Herald it had been difficult to establish the extent of the damage as communications in some of the worst areas remained limited late last night.

For many aid authorities – and some tourists including Auckland University student Rebecca Yeoh – today will be a chance to continue assessing the damage and help with what is expected to be a lengthy clean-up process.

“As scary as our night was, we know that we were extremely lucky to be safe, well-fed and have a roof over our heads. We know that a lot of people have not been so lucky and are going to try go into Nadi town as soon as the weather settles down to see what we can do,” said Ms Yeoh, who was staying at the Hilton with friends.

Cruise ship will set sail from Auckland to Fiji as scheduled

A P&O cruise ship will set sail from Auckland to Fiji as scheduled despite the island nation being in a state of disaster.

Spokesman David Jones said the Pacific Pearl would depart today but the company was continuing to monitor the course of the cyclone which remained a severe weather system.

Mr Jones said the cruise line was working with local port agents in Fiji to assess the situation.

“As it stood last night there was a possibility it would still be able to deliver two out of the three calls in Fiji,” said Mr Jones.

He said the Pacific Pearl would not travel to destinations where there had been significant damage or where communities were not ready to receive cruise visitors.

Until the position of the storm damage became clearer, the company was not in a position to finalise the ship’s itinerary.

The company was working with Save The Children Australia and had donated A$50,000 ($54,000) to relief efforts on the ground in Fiji following the latest cyclone.

As of last night, 186 New Zealanders had registered with the Ministry of Foreign Affairs and Trade as being in Fiji. There have been no reports that any Kiwis were killed or injured.

Kiwi mum Melinda Dent, holidaying in Fiji with her husband, two children and mother-in-law, described her cyclone experience as “terrifying”.

“At the storm’s peak we were taken under covered walkways to the hotel’s ballroom with all the other guests. The walk there was very scary – horizontal rain and wind that felt like it was going to take my feet out from under me.”

NZME account director Ben Rose spent the night sheltered in a boardroom at the Sofitel on Denarau Island. He and about 350 others, including a wedding party, spent the night on the second floor room as the wind howled and rain lashed the island.

“You could feel the pressure of it outside. They were screwing batons across the doors outside. You could hear the wind and the rain …

“About 5.30am the general manager said ‘we’ve managed to make it through the night’.”

A family in Qelekuro Village, Tailevu tries to sort out what was left of their belongings after the tropical cyclone Winston left the country on Sunday. Photo / Fiji Times

The NZ Government has opened an emergency fund of $50,000 and sent an Air Force Orion to Fiji to assess the damage in the nation that will remain in a State of Emergency for the next month.

Foreign Minister Murray McCully has also authorised the release of up to $170,000 in relief supplies held on the island by groups such as Unicef and Rotary. Further help would be decided in coming days once the scale of the disaster was known.

“New Zealand stands ready to assist the people of Fiji as they deal with the aftermath of Cyclone Winston and we are in close contact with the Government of Fiji.”

Queen Victoria School is one of the schools badly affected by the cyclone. Classrooms, office, school dormitories and most of the staff quarters were damaged. Photo / Fiji Times

While the curfew lifts today and the airport will reopen, communication continues to be a major obstacle for aid workers trying to provide relief to those left devastated by the cyclone.

Ahmad Sami, the acting head of the Red Cross’s Suva office, said it was still unclear which areas were worst affected.

Raijeli Nicole, Oxfam’s Pacific regional director, said the islands had been “really hit hard by this cyclone and we don’t have any information whatsoever,” she said.

Travelling to the islands by sea remained “out of the question” because it was not known whether they had functioning jetties.

Roads throughout the country were washed out or blocked by fallen trees, greatly hampering the response and making it difficult for the injured to get to hospital.

“Another area that we’re challenged by is electricity – the main power stations can’t be accessed because the roads are flooded or there are trees across the road.”