Cyclone Pam: Raw video of the aftermath in Vanuatu – and how you can help 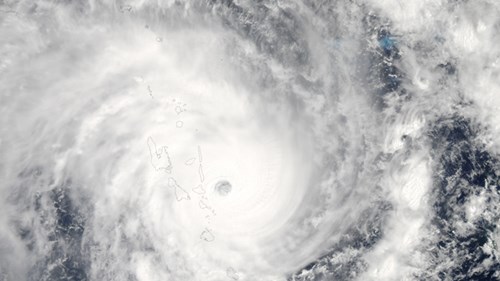 Those trapped indoors in Vanuatu by Cyclone Pam are having to sweat out a nervous wait before they can take stock of the category five storm’s destruction.

Pam has hammered the island nation overnight with winds over 300 kilometres an hour, and widespread destruction is expected.

Winds are dying down on the islands as the storm moves on, and it’s expected those who’ve spent the night in shelter can venture out and assess the damage shortly.

Communication with the islands is patchy, with many calls not going through.

MetService has issued a severe weather warning for much of the North Island from Monday, and the Gisborne District Council is setting up its Emergency Operation Centre today.

World Vision’s Chloe Morrison says while the worst seems to be over, it’s still too dangerous to venture outside.

Cyclone Pam has begun to move away from Vanuatu, after a terrifying night for tourists and locals sheltering from the Category Five storm.

Reporter Frances Cook spent the night at a shelter in the capital, Port Vila.

“The noise was intense. They were expecting wind gusts of over 200km/hr and you could hear every bit of speed in it.

“It was absolutely screaming round. I was in a concrete building and it was still shaking.”

It hit the capital Port Vila as a Category Five storm, and there are reports of more than 40 deaths in outlying islands.

Morrison says her night in a shelter was terrifying.

“Probably the most terrifying part of the ordeal was when I heard what sounded like a tin roof land on our roof, and now I can see it’s actually flown right off and is in our front yard.”

WeatherWatch.co.nz Head Analyst Philip Duncan says it’s still a Category Five system this morning, with wind gusts of up to 340 kilometres an hour.

“It is a very serious storm, it’s still at the high end. It is not expected to really weaken a lot today. While it is going to drop from a category five to a four, that’s a little like the temperature dropping from 21 to 19.”

Charity Drive – how you can help

Rotary New Zealand has launched a charity appeal to help those in Vanuatu affected by cyclone Pam.

The charity has 600 emergency kits on standby to send to the islands.

Funds raised will be used to help with rebuilding efforts after the island nation was devastated by the category five storm this morning.

Details: At any Westpac Branch or by Internet Banking