Cyclone Pam ‘could be one of the worst in Pacific history’ 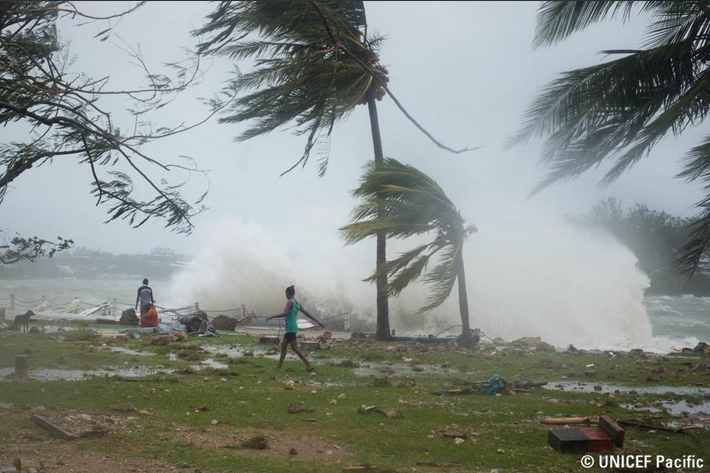 The destruction caused by Cyclone Pam “could potentially be one of the worst in Pacific history”, Unicef has said.

Unicef New Zealand executive director Vivien Maidaborn said: “While it is too early to say for certain, early reports are indicating that this weather disaster could potentially be one of the worst in Pacific history.

“The sheer force of the storm, combined with communities just not set up to withstand it, could have devastating results for thousands across the region.”

Dozens of people are feared dead after Cyclone Pam pummelled Vanuatu overnight, with those on the ground describing the “utter devastation” it has caused in the capital.

There are no official reports of deaths or injuries, but there is an unconfirmed report that 44 people have died in Penama Province, the United Nations Office for the Coordination of Humanitarian Affairs said.

Alice Clements, a spokeswoman for relief agency UNICEF in Port Vila, said the capital had been devastated by the storm.

“It looks like a bomb’s gone off,” she told NZME. News Service. “Tourists who have been to Port Vila wouldn’t recognise it.”

She said trees and tin roofing were strewn across roads, making it impossible for cars to be on the roads. Broken shutters and glass from blown out windows was everywhere she looked.

“There’s no water or power in Port Vila, but we’re lucky that there appears to be some telecommunications so we’re using that while we can,” Ms Clements said.

She said aid was needed immediately. “We really need some assistance here quite urgently. This will have huge implications for Vanuatu.”

She earlier told Radio New Zealand: “I stayed in a concrete hotel that was three-storeys high, and even so I’d lost the sliding doors from my room, I had all the wind howling through the room. It was 15-30 minutes of absolute terror for everybody in this country.”

She added: “There’s debris everywhere, there are buildings that are destroyed… this is really a catastrophe.”

She said it was impossible to estimate how long the clean up would take, but said everyone in Vanuatu would be assisting. “Everybody is affected, this is not an isolated problem. We’re all in this together.”

Images of destruction are emerging from our colleagues on the ground in Port Vila, #Vanuatu. #CyclonePam #TCPam pic.twitter.com/P6SxJJPl5y

MFAT said there are currently 148 New Zealanders registered in Vanuatu.

Ms Maidaborn said the biggest concern for Unicef was ensuring people have somewhere to shelter, given that many would have lost their homes.

“Another major concern at this point is around access to clean and safe water,” Ms Maidaborn said.

“Power outages will have a dramatic effect on access to water which will become scarce very quickly. Waterborne diseases from the aftermath of the storm are also a huge concern.”

Unicef was working with the National Disaster Management Offices in Vanuatu, Fiji and Solomon Islands to support the emergency response, particularly in the areas of water, sanitation and hygiene, nutrition, health, education and protection, she said.

“While additional updates and assessments continue to come through from our colleagues, we are on stand-by to launch our fundraising efforts so that New Zealanders can give a helping hand to our Pacific neighbours in need.”

The Red Cross said it had been unable to get in touch with its staff members in Vanuatu today. “I think all the phone lines and power lines are down,” spokesman Andrew McKie said. “But we are preparing to send relief supplies over and some people as soon as there’s flights available.”

The Red Cross had prepared supplies in Vanuatu ready to distribute in the immediate aftermath of the cyclone. “But with the whole country being affected they’re going to be distributed, and they’ll run out fairly quickly, I think.”

The clean-up would be a “huge emergency response operation”, Mr McKie said. “It’s going to go on for a long time I think, and as the news develops I think it’s going to be pretty grim.

“A lot of the houses, especially in Port Vila, are people who’ve migrated from other islands and they live in sort of squatter-type villages, and they’re basically sheets of corrugated iron held down by concrete blocks – certainly nothing cyclone-rated.”

“If someone was not in a safe structure, it wouldâ€™ve been a battle to survive,” – Chloe Morrison, #WorldVision #Vanuatu #CyclonePam

In the latest update from WeatherWatch, head analyst Philip Duncan said the situation on the ground had been described as “worse than worst case scenario”.

He described the cyclone as “a devastating, historical, direct hit storm” for Vanuatu.

“While I cannot confirm the reports from my Vanuatu contacts, and others online this morning, they do mention houses and complexes being destroyed, many roofs gone,” he said.

“As Pam moves past eastern New Caledonia later today and tonight her overall movement will speed up, which is better news for New Zealand as it means the low is less likely to linger – the longer it stays the higher the damage.”

He continued: “The jet stream is hopefully going to help guide Pam just to our east – it certainly looks likely on Monday to help give Pam a push further east of the country by the end of the day.”

Care International described the “utter devastation” in the capital. Project manager Charlie Damon told her colleagues in New Zealand that trees were down all around the hotel where she and several others were sheltering.

Ms Damon said she had been told some of the evacuation centres providing shelter for people had lost roofs and flooded in the storm.

Save the Children yesterday warned up to 50,000 children could be at risk from the storm, and was today preparing to send an emergency response. The children’s aid agency said children were particularly vulnerable in such storms.

“Cyclone Pam is heading straight for us here in Port Vila and thousands of children are in danger,” country director, Tom Skirrow said. “Children can easily by swept away by flash floods, hit by falling debris or become separated from their parents in the chaos of a disaster. There will be extremely strong winds and likely torrential rain for hours on end as the storm passes and it’s critical that children are kept safe both during the storm and in the aftermath.”