Cyclone Oma is stumping some computer models with two of the most trusted cyclone forecast models taking oposing views about the future track of the storm. It places New Zealand in a frustrating 50/50 position with one model (GFS) showing a direct hit while ECMWF shows Oma doing a 180 turn and backtracking north again. Many other models show the low sliding into the New Zealand area while becoming extra-tropical (the technical change within a storm when a tropical cyclone drops far enough south).

The reason for the confusion? High pressure around Tasmania. Like an invisible barrier in the sky the high pressure system will do one of either three things later this week:

So it is very much a waiting game for the models to align. WeatherWatch.co.nz says Cyclone Winston in February 2016 had a similar issue as it tried to track south towards New Zealand but high pressure in the NZ area kept pushing Winston back around the tropical South Pacific, changing direction a number of times.

WeatherWatch.co.nz says while both models don’t yet agree about tracking, they do both agree that a low of some type will deepen around the eastern North Island this weekend, which is likely to bring in some rain regardless of if Oma directly comes here. There are dozens of other reliable global storm models we are monitoring too, many lean towards Oma directly impacting New Zealand but some aren’t as trustworthy as others for our part of the world. NZ is a complicated area for tropical storms as cyclones go through a technical change to become extra-tropical when they reach us. This is when the core of the low goes from being warm and tropical to instead cold air and more like “the usual” southern storms we see. This adds a greater level of complexity than just forecasting “a cyclone” as you would do in the tropics itself.

As we exclusively forecast last week, Oma reached Severe Category 3 status over the weekend for about 24 hours and may hover around the strong Cat 2/weak Cat 3 level for the next couple of days in the Coral Sea, where it may brush northern New Caledonia – but should give Vanuatu a nice wide birth to the west.

We’ll keep you posted with special videos and extra updates this week here at WeatherWatch.co.nz… 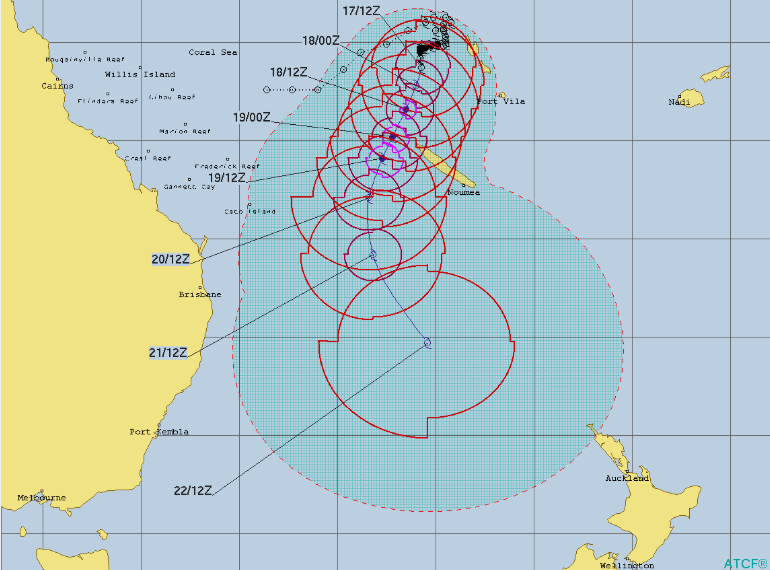 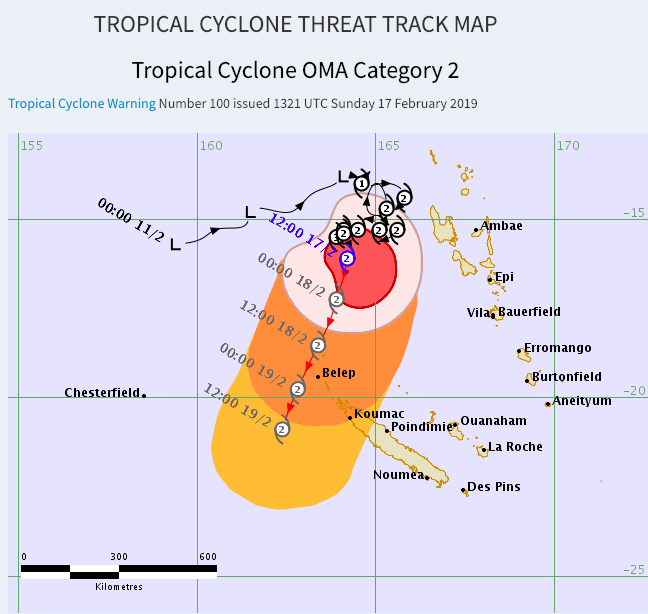 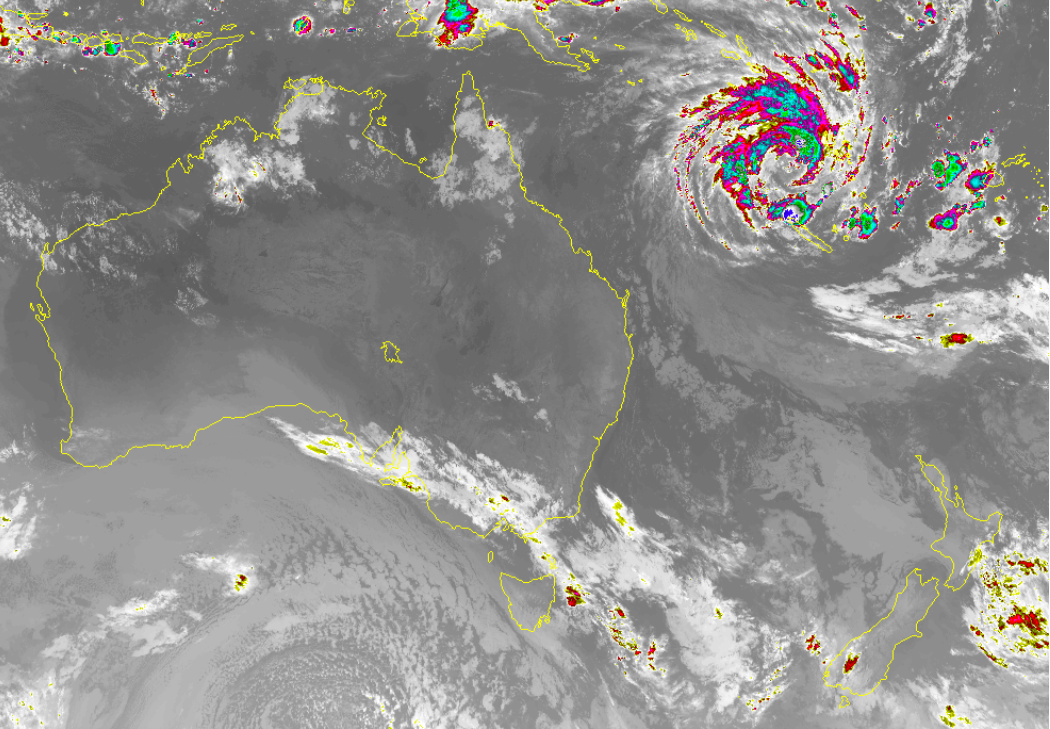 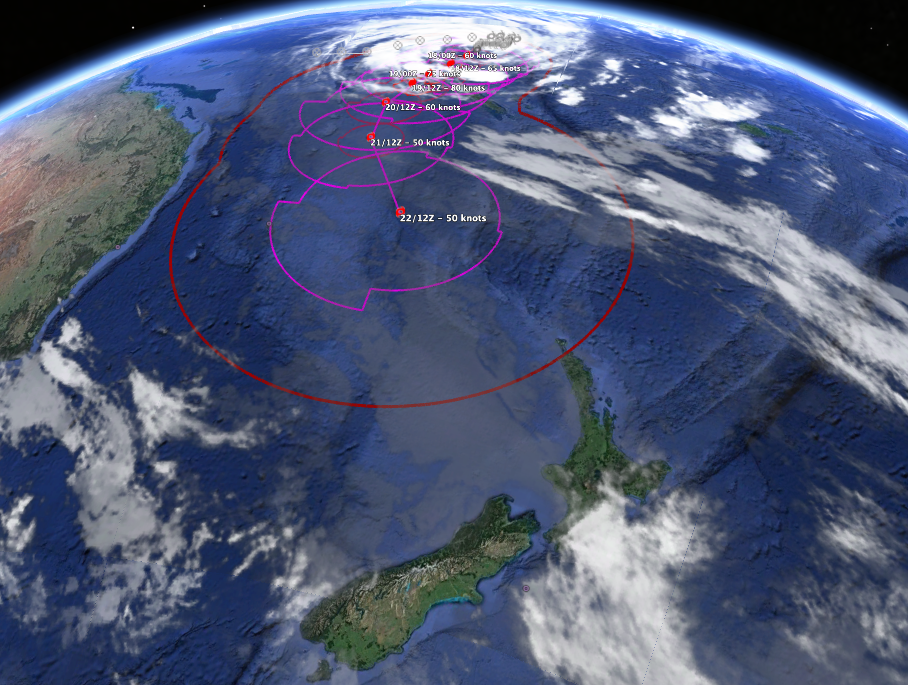 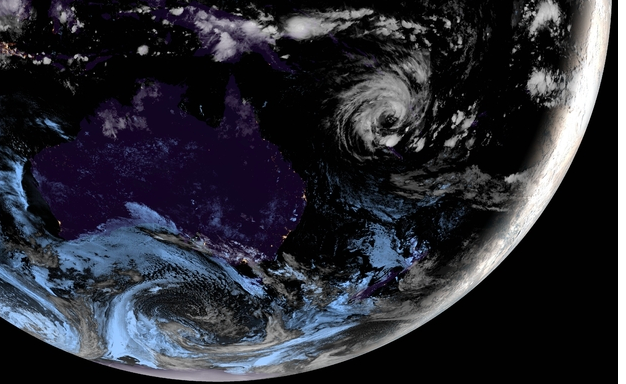 – Oma as seen just before sunrise this morning / NOAA, US Govt

THE MODELS:
Top two are GFS (US Govt) showing this Friday night and then this Saturday night. The following two maps are ECMWF and are also for this Friday night and this Saturday night.  Note how ECMWF shows the low doing a 180 and backtracking on Saturday? This is where the uncertainty is coming from in some future tracking. Modelling mostly agree with tracking up until this Friday night but the weekend remains quite uncertain – although it is worth noting that both models agree a new low will likely form around the eastern NZ area creating some wet weather this weekend. 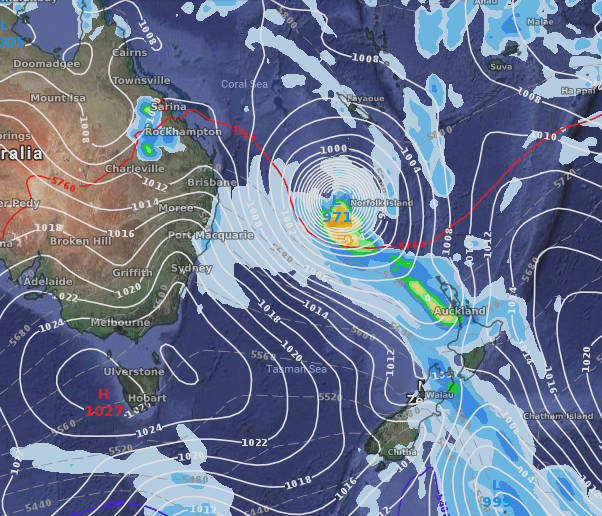 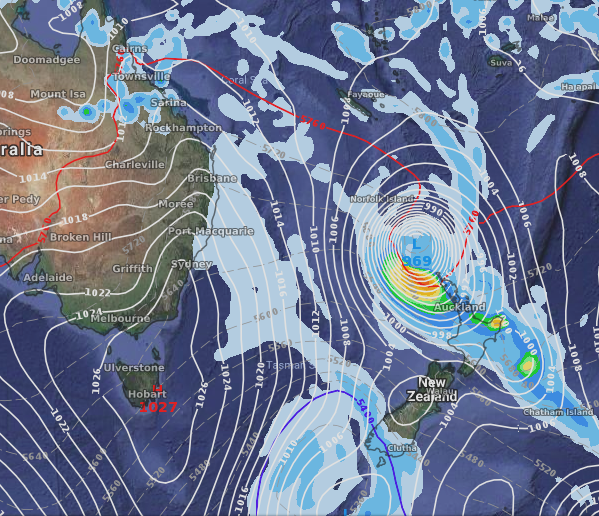 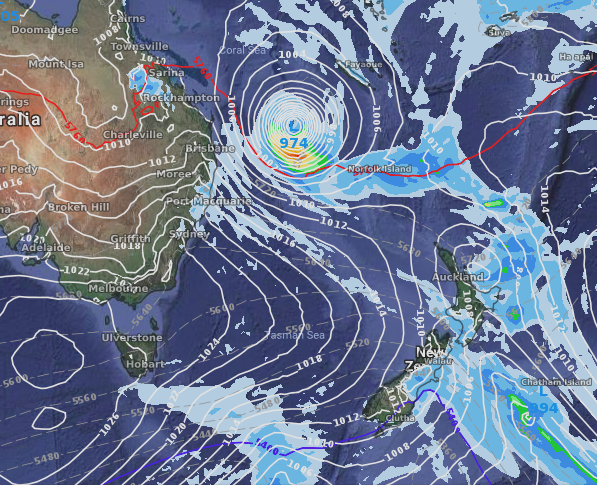 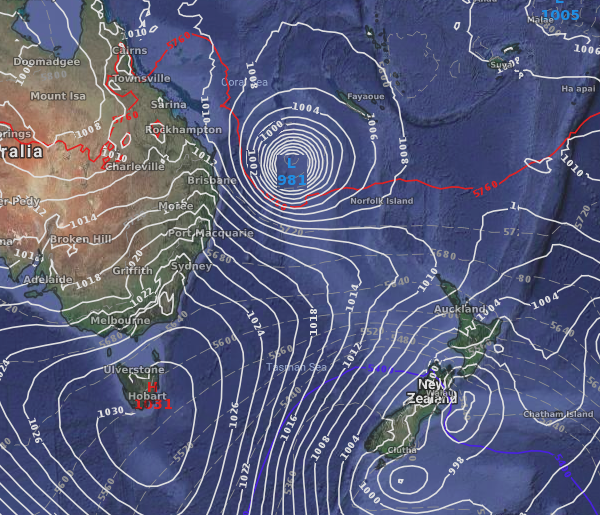 THIS FRIDAY NIGHT – SHOWING BOTH GFS AND ECMWF:

GFS is displayed in the tracking/category strength while ECMWF is simplying showing one placement of the centre of the cyclone (in “C”). These two models show similar placement up untl Friday evening but then (currently) disagree about future movement of the low into the weekend… 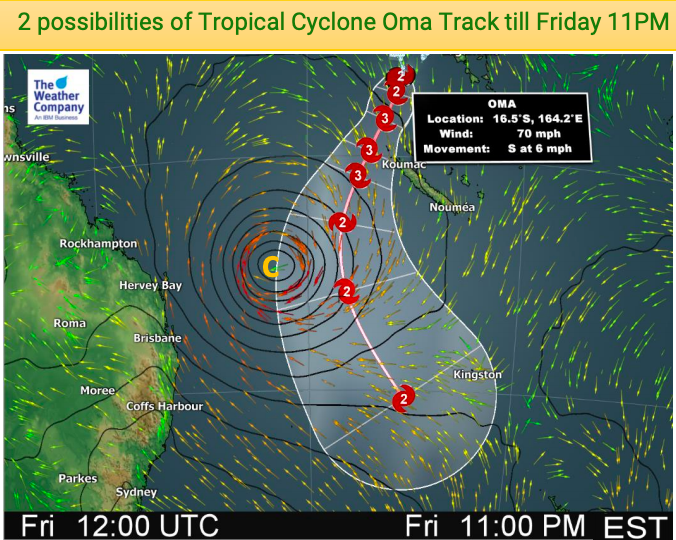 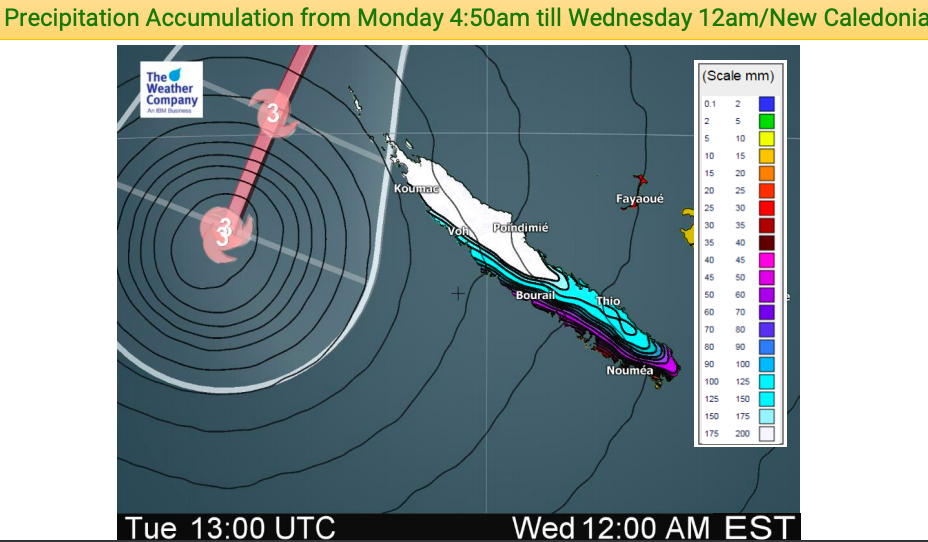 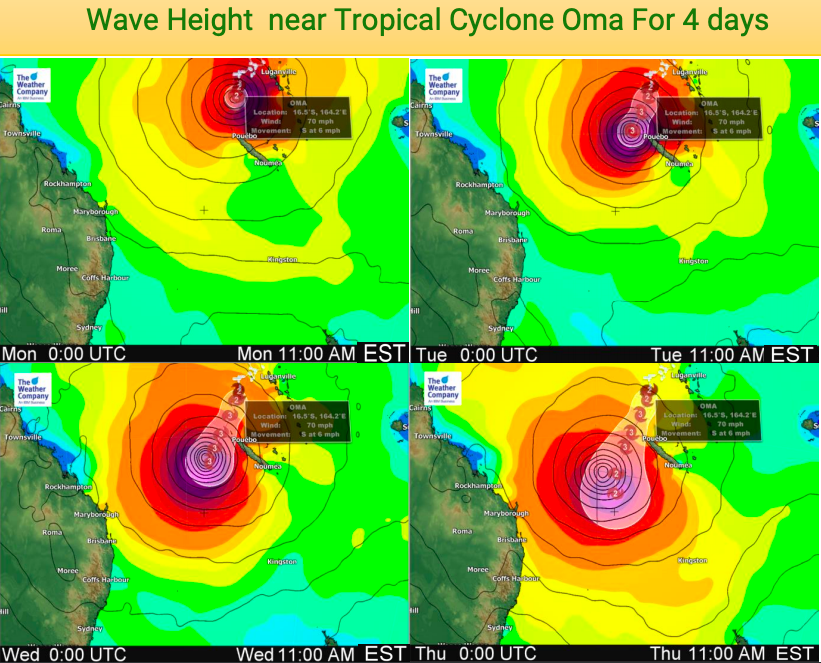 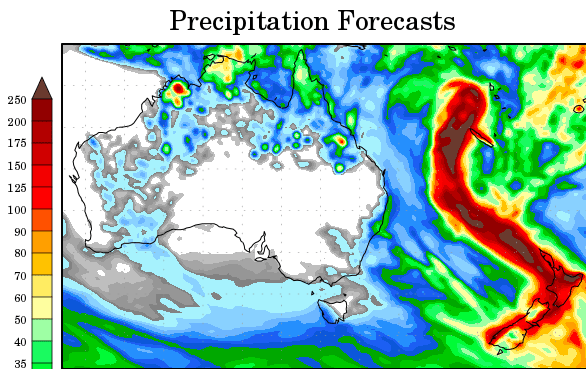 – Next 7 days rainfall as projected by one computer model, GFS 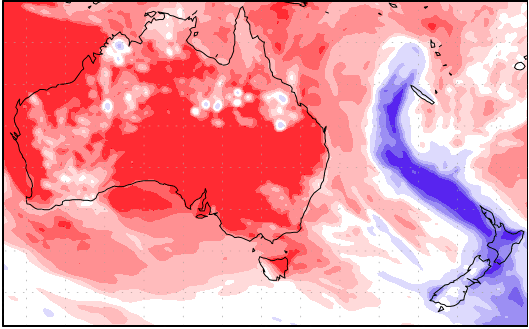 – Next 7 days rainfall compared to normal. Red drier than usual, Blue wetter than normal, White = average rainfall. Please note this is only ONE model and it hasn’t not been consistently showing so much rain for New Zealand. On Sunday it showed only the top half of the North Island in blue, so there is still plenty to lock in – but this is the current thinking from the US Government as of Monday morning for the next 7 days.

My bet is Brisbane is in for a wet time.
Not expecting a drought breaker this weekend.

We have king tides occurring from tues-sun this week so this would just about align with the arrival of Oma!

Great coverage gentlemen, it will be very interesting. I won’t be surprised if we do get a direct hit from this one. Flooding looks very possible after the dry conditions

Keep up the great work, you are well ahead of our friends at MS, their tropical summary was last updated 2 days ago