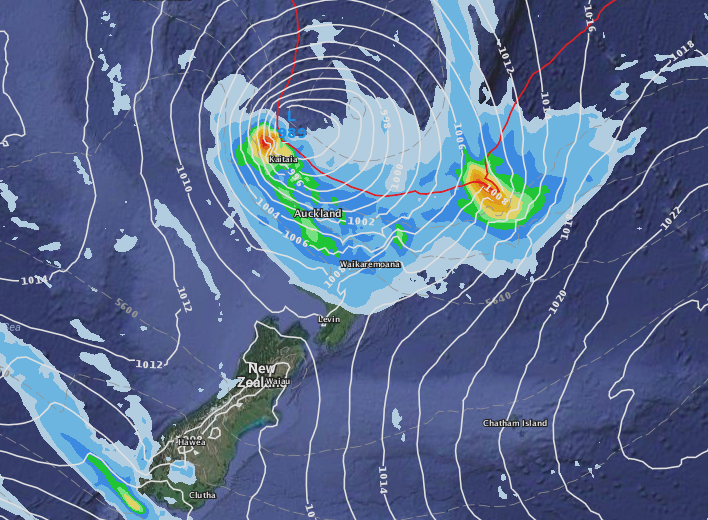 UPDATE: Cyclone Hola is over open waters and now directly heading for northern New Zealand. Cloud associated with the storm is already spreading south over the North Island although winds are not expected to really ramp up until Monday.

Hola remains a category 2 cyclone but is weakening today as it rushes south eastwards away from the equator.

Current wind speeds at the centre of the low are estimated to be averaging 100km/h on Sunday morning with gusts to 130km/h – this should drop to 65km/h by Monday making it equal to a Category 1 tropical cyclone with gusts over 80km/h. Those speeds may not sound too bad but remember these are the winds at sea – the mountains and ranges can greatly increase the gusts into severe gale and stronger and increasing the chances of wind damage. These same mountains and ranges can also bring calm conditions to others. Those just more than a couple hundred kilometres from the centre may not experience strong winds.

The general track of Cyclone Hola as it passes through New Zealand is fairly clear but the precise tracking of the centre still has some uncertainty. Precision in a compact storm like this matters, because damaging winds and flooding rains are wrapped around only the centre.

While updating this story ECMWF (Europe) updated their tracking maps and have aligned with GFS (America). Both show the centre of Hola just to the east of Northland and East Cape as it tracks by – a slight jog west could see landfall or the storm centre may remain out at sea. Highest risk for a landfall appears to be in East Cape around Monday night or very early Tuesday.

MetService, the Government forecaster in New Zealand for official tax funded warnings, says in their latest Severe Weather Outlook (issued Saturday) “There is still some uncertainty with respect to Hola’s forecast track. The affected areas and associated confidence levels depicted [in the severe weather outlook] are highly dependent on Hola’s track” They are expected to start issuing more detailed warnings today.

WeatherWatch.co.nz says regardless of which international tracking is the most accurate northern and north eastern New Zealand will be most exposed to a direct hit, or a close swipe. Flooding rains and damaging winds are possible in Northland, parts of Auckland, eastern Waikato, Coromandel Peninsula, Bay of Plenty, East Cape and Gisborne. There may be more moderate risks in nearby regions. However the centre of the storm being out at sea is usually a better forecast for New Zealand than a direct hit. Either way it’s very close and one to monitor closely.

Hola is currently transitioning from a tropical cyclone to an extra-tropical cyclone. While this may not impact the severity of the storm too much it does shift the energy and therefore that affects how the weather might impact people. One of the most noticeable features of extra-tropical transition is how the rain bands shift from circling the entire low to mostly lying in the southern half of it. Another noticeable feature once Hola reaches New Zealand is that it will lose that perfect circular centre – as we saw with Gita the centre caused damaging winds in Taranaki where it made landfall but not so much in Wellington as the low changed shape as it moved through.

It’s unclear if the very centre of Hola will make landfall or simply just swipe New Zealand to the east.

With the storm over open waters for today there may not be much more additional information/updates – however we do expect more details (including being more specific about impacts) by Sunday evening.

NOON MONDAY – What the models are saying: 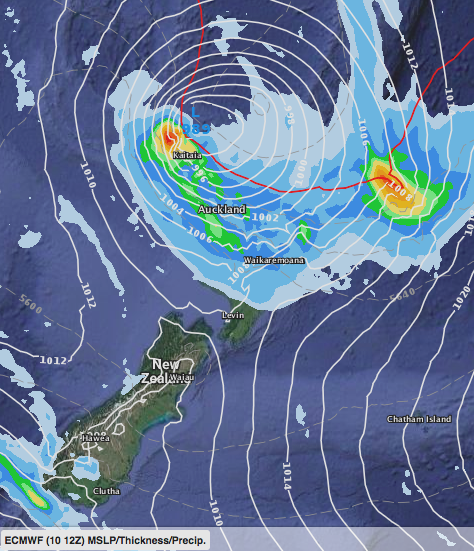 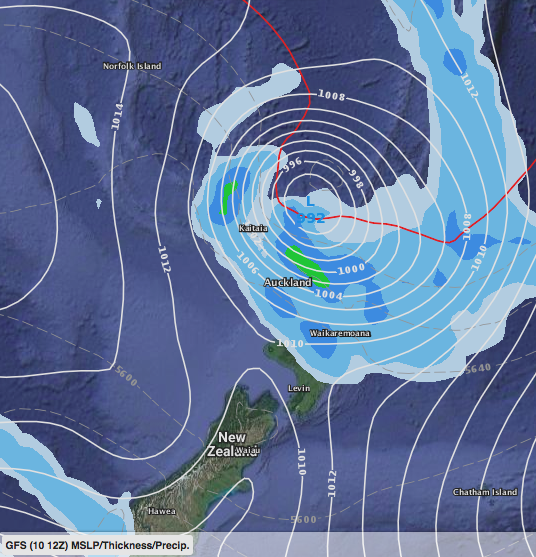 – GFS shows Hola just a little bit further east of Northland than ECMWF, with more of the severe weather at sea. Either of these models could be accurate and either way the upper North Island is exposed to severe weather risks. 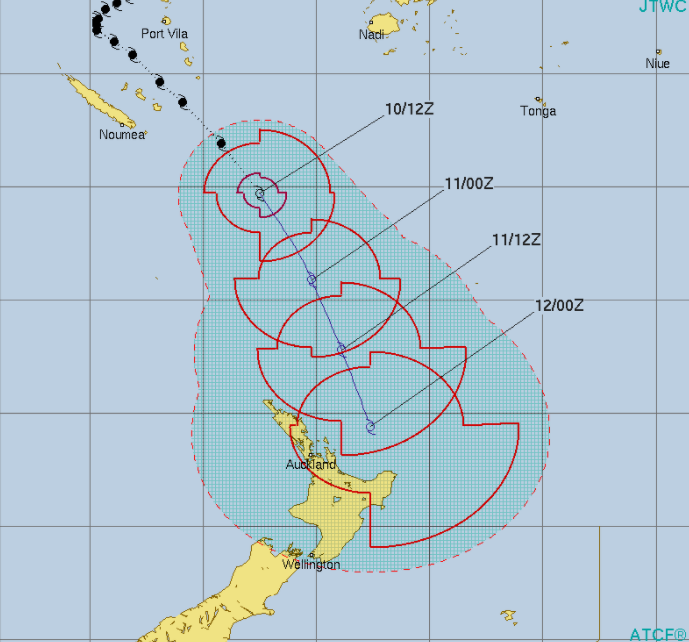 – JTWC latest tracking shows the storm centre may be just east of NZ but severe weather could still impact northern and north eastern parts of the North Island. 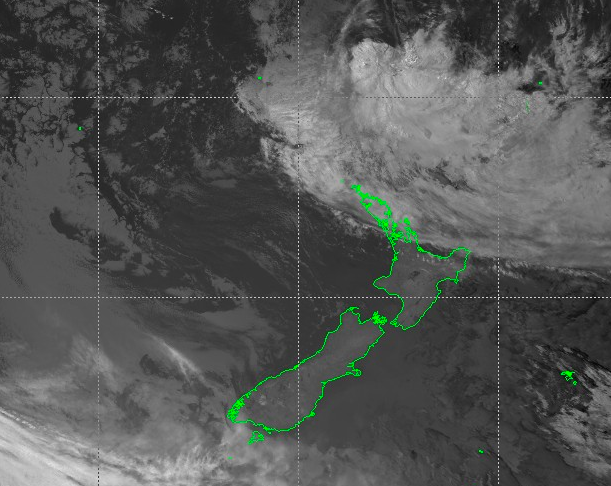 – Himawari satellite map from this morning showing the cloud from Cyclone Hola now spilling over the upper North Island. 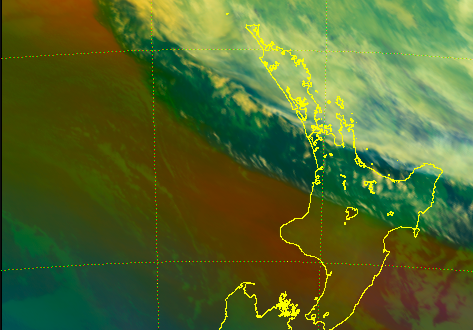 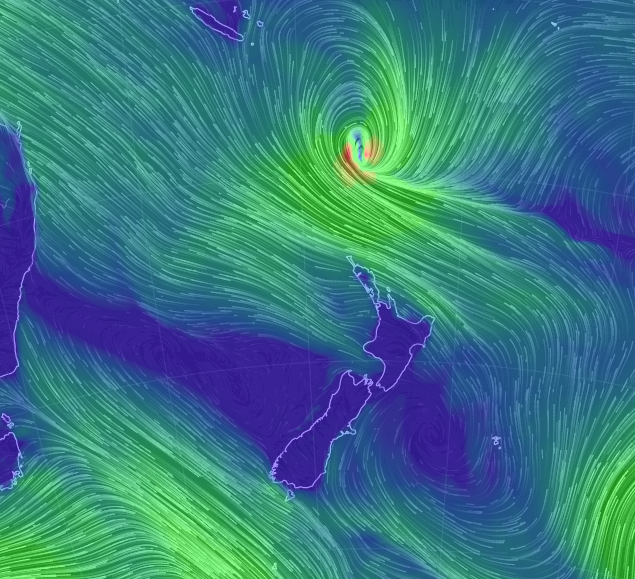 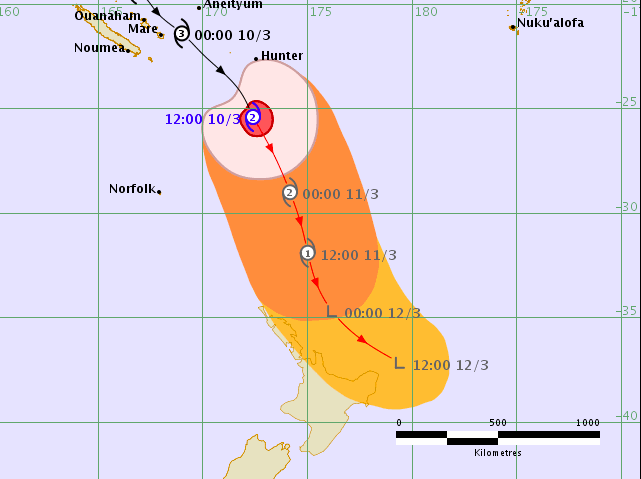 Look out New Zealand (top bit of the North Island).