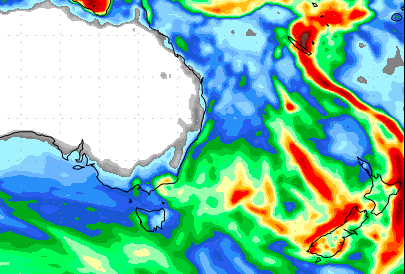 DETAILED UPDATE (Updated 4:23pm NZT) — Severe Tropical Cyclone Cook has made landfall in New Caledonia as a Category 3 storm.  It will cross New Caledonia tonight then it’s on to New Zealand where a direct hit is looking increasingly possible around East Cape.

Earlier today the Fiji Met Service forecast it may reach Category 4 today but this afternoon an update kept it at Severe Category 3 status which will still see winds gust over 200km/h and a significant storm surge. 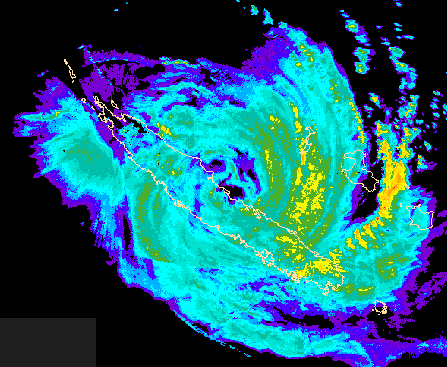 New Caledonia is a very narrow piece of land relative to the storm size and ocean around it so the French island is unlikely to weaken the storm much but as Cook tracks further south a combination of crossing over some land and heading over cooler waters will see the storm weaken.

RISKS FOR NEW ZEALAND
By Wednesday it will be a low end Category 1 Cyclone but that simply means the air pressure is rising again at the centre and the winds are generally reducing in size – it doesn’t stop the rain or storm surge or gales near the centre , in fact the rain clouds may even accelerate as the low moves in and starts to work in conjunction with a large low in the Tasman Sea.

So on Wednesday expect tropical downpours to develop in parts of the upper North Island – with torrential falls developing and increasing over Thursday and early Friday morning.

Areas in New Zealand most likely to be hit by flooding tropical rains are those in the north east – mainly BAY OF PLENTY, EAST CAPE and HAWKE’S BAY.  However it’s worth noting cyclones can ‘wobble’ in their tracking (ie, shift a little left or right/east or west) as they track south towards narrow northern New Zealand/East Cape so it’s possible other regions may be added/removed in main rain risk areas in the next the day or two.

As the models stand on Monday afternoon there’s a fairly high chance Cook may make landfall on East Cape overnight Thursday/early Friday morning placing Whakatane, Edgecumbe, Gisborne and Wairoa as larger towns most exposed to the centre of the low crossing over. There’s a chance the low may also track further east should the blocking high pressure system east of New Zealand shrink in size over the coming days.

Separately, the Tasman Sea low may also bring in heavy rain to the West Coast and surrounds with possible rain warnings.

But it’s the cyclone remnants in the north (as cyclones technically lose their ‘tropical cyclone’ status just shy of Northland as they track southwards) that concerns WeatherWatch.co.nz the most rain-wise.

“Yes the storm may bring in some big swells, dangerous seas and gales right near the centre – but from what we can see at this early stage torrential tropical rain could be the most threatening aspect of this storm for New Zealand”.

What about damaging winds?
From a wind perspective Cyclone Cook is a very intense but a fairly small sized storm.  “A small but intense cyclone can almost be like a giant tornado – very damaging near the centre but a fairly short distance away it can be calm and just the ‘usual’ weather” says Duncan. “From a wind perspective truly damaging gales may only extend 100kms out from the centre and some modelling indicates the low in the Tasman Sea may remove more of the wind threats to those on land further west from Cook which is a positive”.  Damaging winds are most likely around East Cape plus or minus 100kms at this stage.

The storm is likely to have a very tight centre with air pressure somewhere in the 980hPa range as it passes by East Cape – or over East Cape – in the early hours of Friday morning.

Please note – this is a bit like a bowling ball heading towards us. It may curve off before reaching north eastern NZ, it may slow down and lose it’s oomph before landfall, or it may come straight in with a direct hit.

There is a chance the low may just slide east enough to avoid a major headache for New Zealand – but the risks are certainly there when an intense area of tropical weather moving in like this.

Note how close the storm gets to East Cape. One bit of good news (as you can see illustrated below) is that even if the low directly hits East Cape the worst of the wind and rain is usually in the south eastern quadrant, which is out to sea. That shouldn’t minimise the serious risks posed to those in the areas with further torrential rain and strong winds possible – but it does show that the further east the low tracks the better it is for places like Edgecumbe, for example.

Below – 7 day rain map – red shows highest rainfall totals – and this clearly shows the path of the centre of Cyclone Cook as it snakes in an “S” shape towards and past New Zealand. This is a great map to illustrate how cyclones move around and why their exact path is hard to perfectly forecast. 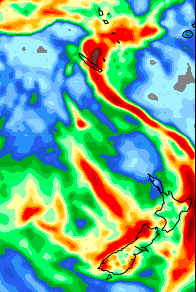 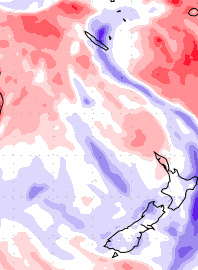 In this map Above Blue = Wetter than average (the darker the shading the wetter it is).  Red indicates drier than average. White = average. Note how narrow the cyclone is – but how intense the rain is near the centre. 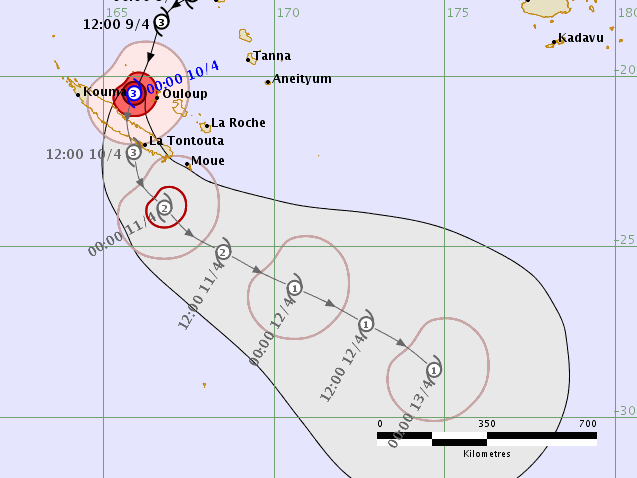