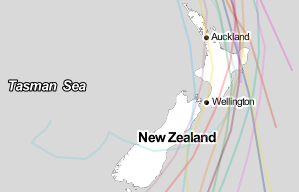 But what exactly does “weaken” mean in this scenario? And why all the warnings of flooding if Cook is so small?

As a cyclone tracks south it loses the warm core that fuels it as it tracks over cooler ocean waters. This process means the storm “technically” loses its cyclone status. As the storm “weakens” a few things happen. The peak winds ease back. The air pressure rises. The total size of the storm (centre with severe weather) often shrinks. Storm surges under the eye reduce in height.

However the rain can remain – and in this case it’s more complicated than just Cook as the rain may actually intensify.

Cook just on its own may prompt some concerns of wind damage and flooding right near the centre – but the reason for all the concern this week is to do with a large low in the Tasman Sea and the connection between this and Cook that will produce a secondary area of intense, slow moving rain over places like Bay of Plenty, East Cape and Hawke’s Bay.

The rain bands are intense but narrow – just like with Cyclone Cook. This means many people won’t be impacted by severe weather – but those who are impacted could be exposed to significant torrential rain and as we’ve seen since March even in small pockets this can cause major flooding.

If you look at the rain maps for Wednesday, Thursday and Friday for the North Island you can see very intense areas of rain but 100kms east or west of it conditions are much drier/normal (see map for Thursday night below for an example).

This fine line between stormy and normal is why some forecasts are chopping and changing – and why the percentage of rain may also be jumping for some in the north (like Auckland which is so far mostly on the outer fringes of the heaviest rain).

At this stage landfall looks possible around East Cape on Friday morning – but the models are still fine tuning it. A direct hit is possible, so too is a near brush to the east. Either scenario paints the same forecast though – rain looks to be main issue and those in the upper, in particular north eastern, North Island should be up to date with all official warnings and the latest news and forecasts over the coming days. 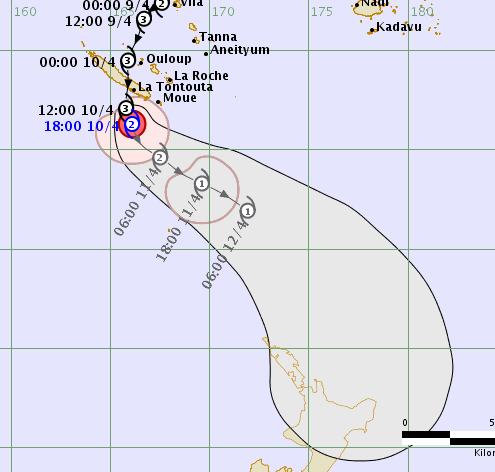 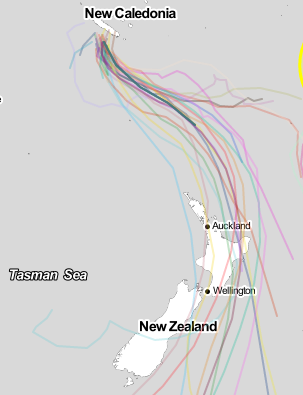 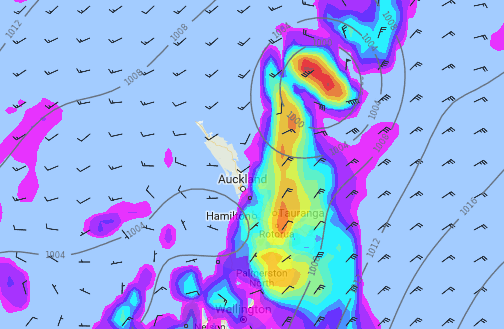 Rain map for Thursday night shows two things – Cyclone Cook (or Ex-cyclone Cook by then) to the north and connected to that over the North Island is a band of very intense rain – but to the west and east it’s dry, putting places like Whangarei, Auckland and Hamilton on the cusp of heavy rain.

Hi there I am heading over to New Zealand this Sunday for a sporting tournament in Hamilton. Is it likely that the tournament would be cancelled or flights cancelled delayed. Are there any major sporting events in New Zealand being cancelled? Or is it hard to say.
Thanks Ben

Hi Ben, there may be some downpours on Sunday but the weather isn’t major around then (at this stage anyway). The worst of the weather has now cleared the upper North Island of New Zealand and is tracking southwards into the South Island.

Keep an eye on our detailed Hamilton forecasts, but hopefully should be all good for you.
Regards,
WW

We were visiting NZ North Island for the first time. We would like to know when which days would be affected severely and which are normal. Here is our timetable

Thanks and we appreciate your help.

At this stage we don’t see further severe weather in these areas. Keep up to date with NZTA’s highway website for any possible detours or road closures as a result of slips or flooding, but hopefully things should be ok for you then. Have a safe and enjoyable journey 🙂

Hi could you please tell me if my daughter is safe to fly to Auckland next week ?

Hi there – yes next Tuesday looks much much better than today does. Things are a little unsettled around NZ but Tuesday should be better.

Heading to NZ south island on Saturday for the first time from overseas, will the cyclone be heading down there at all? Thanks

Hi there – the good news is that it will be clearing around then – sunny weather moving into some eastern areas.

Have a great trip here – and welcome!

Hi there – take a look at our latest video as it shows where the low is going to track tonight. Yes you have a chance of wind and rain for time on Friday morning and it has the chance of being severe for a time too, so keep up to date with your local forecasts and any possible MetService warnings etc. Hopefully it won’t be too major but there’s a risk of damage with this system as it passes by.