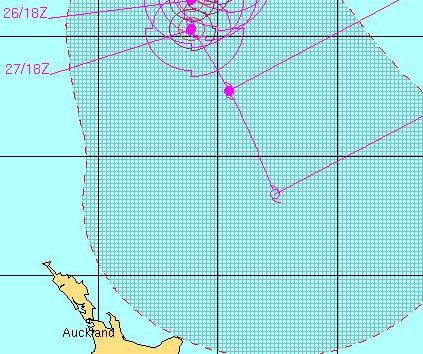 The Fiji Meteorological Service yesterday said it would only reach category two status however the storm has strengthened quickly and this hour confirmed the cyclone has gone up a status with winds now averaging hurricane force at 120km/h.

By dawn New Zealand time the cyclone is expected to have sustained winds at 150km/h according to Fiji Met.

The central air pressure is now 970hPa and the cyclone is still intensifying.

WeatherWatch.co.nz made the early call yesterday on the predicted category status based on reliable computer models, favourable sea surface temperatures and the right atmospheric conditions.

Bune – which is pronounced “mm-boo-nay” – is currently drifting very slowly, at walking speed, in a south easterly direction.

WeatherWatch.co.nz says it’s likely to become a strong category 3 cyclone over the weekend with the possibility it may even briefly touch category 4 status for a time out over the open waters and well away from land.

By the time Bune reaches nearer to New Zealand midway through next week it is likely to have lost its technical tropical cyclone status and category levels.  That, however, doesn’t mean the storm will be any less ferocious.  Severe gales will create huge seas off East Cape by mid next week and that will create dangerous rips and surf right along the eastern coastline of the North Island, in particular around East Cape, Gisborne, Hawkes Bay and Wairarapa predicts WeatherWatch.co.nz.

The path of Bune takes it in a rough S shape tracking south east this afternoon, southerly tonight then south westerly overnight.  By the end of Sunday the Fiji Meteorological Service says Bune will track back southerly again then south easterly.  It should be tracking in a south east direction when it passes 300 to 600kms east of East Cape next Wednesday.

The Joint Typhoon Warning Centre expects Bune to become a strong category 3 storm by the weekend with winds averaging almost 160km/h and gusting close to 200km/h out at sea.

WeatherWatch.co.nz reiterates that it is highly unlikely that Bune will make a direct hit on New Zealand but says it may bring severe weather to East Cape and Gisborne around Wednesday next week in the form of gales and heavy rain. 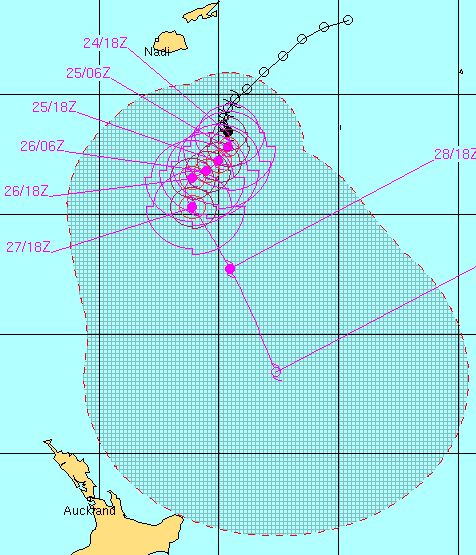 The latest track by JTWC

Interesting to note todays long range Met Service marine report in the Saturday Herald predicts Tuesday it will be heading for the north of the North Island late on Tuesday, this is the cut and paste from the Herald “Late on TuesdayTropical Cyclone Bune is expected to approach the north of the North Island”. Certainly different from your forecasts which have always stated it to track S/E past East Cape.
Having personally experienced the huge inaccuracy of the Wellington based Metservice forecasts at the time of the last January Cyclone on a trip from Great Barrier to Auckland I know who I would have my money on!

I think you are taking that out of context
what they mean is it will be moving S out of the tropics on Tues, i.e in a direction towards the North Island
but they are not meaning that it will carry on moving in that direction
if you check the M/S severe weather outlook they say it will pass to the east of the NI but could bring gales and rain to east cape (which is thinking by Phillip too )