Cook Islands – Cyclone Mike bears down on the Pacific 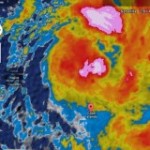 The Cook Islands is bracing itself as Tropical Cyclone Mike heads towards the Pacific nation.

The Fiji Meteorological Service says the cyclone, which is a category one storm, is moving southeast at 22 knots.

Sustained winds of 35 knots close to the centre is expected, and it is expected to increase by 45 knots by tomorrow.

Kake Ioane, senior meteorological observer at the Cook Islands Meteorological Service told Pacific Beat the islands are currently experiencing light to moderate rains, but these are expected to intensify tomorrow as the cyclone moves southeast.

“Our current weather now is with calm wind, with moderate to heavy rain at the moment and for Aitutaki, there’s some gusty strong southeasterly wind about 40 knots,” he said.

“I don’t think there’s some damage at this stage, but maybe later on, but very rough seas and like I said, moderate to heavy rain at the moment, with very calm wind.”

Mr Ioane says the people are ready and prepared for the cyclone. They are bracing for periods of heavy rain, thunderstorms, flooding, high seas and damaging heavy swells.

The Cook Islands has had brutal cyclone experiences in recent years.

In 1997, Cyclone Martin slammed into the northern Manihiki atoll, destroying all habitation and killing 28 people.

In February 2005, Cyclone Meena inflicted major damage on Rarotonga, including the complete swamping of the celebrated Trader Jack’s waterfront bar.

Looking at the maps it looks like it already passed??

Hi WW, Have you any idea when this will hit the Cooks and how long it will be before it passes on. Reason is we travel there on Saturday evening for a weeks holiday. I have ben watching this event on the Rarotonga Weather sites but this is the most I have read so far about it.

Thank you for your info if you are able to supply.

You can track the storms progress and timings using our rain and wind
maps in the “MAPS” link above.  For long range forecasts go to weather.com and search for Cook Islands 🙂

Thank you WW, will do that.