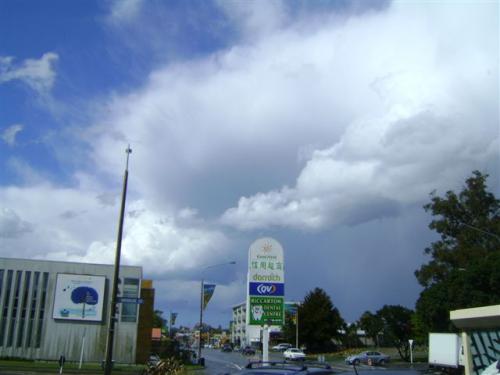 Across New Zealand over Wednesday and Thursday this past week autumnal air spilled out of the Southern Ocean and flooded across our country, filling the southern valleys with the coldest of the air, where it will again sink tonight below freezing and create frosts in sheltered areas.

The southerly change is another significant part of breaking the droughts.

For us to have a national southerly wind flow it means we don’t have a large high over us.  Instead, the highs are seeming to be a little more cautious about spreading over New Zealand, spending more time in the Tasman Sea which is allowing these southerly quarter winds to blow in.

Gaps in the highs allow southerlies – great for our eastern coastlines due to NZ’s roughly 45 degree tilt it means the southerly can push into all those dry eastern areas with showers – regions like Canterbury, Wairarapa, Hawkes Bay and Gisborne.   It’s also meant Wellington has had some more of the wet stuff too, as has Otago and Southland.

The wind flow has been more south east in other areas, allowing the sun to come out following recent rain and helping to boost grass growth.

Piece by piece New Zealand is turning greener again.  However an email to me from a Country99TV viewer in the central North Island  this week pointed out that their farm has had just 11mm so far this year, while down the road from them some farms have had closer to 100mm.

This is what happens when a drought is fixed by showers and patchy rain – it’s hit and miss across the regions.  Inland areas need BIG rainmakers to cause a soaking.  This is why Central Otago (furthest from the sea) is our driest region and also why the main road through the North Island’s Central Plateau is called the “Desert Road”.    These are dry areas that need the big lows and fronts to penetrate inland enough to bring relief for them.

In short – coastal areas will see these droughts end the first.  The West Coast of the South Island has already seen a major reversal in the dry weather and pockets of the North Island are also seeing some relief now.

But I have to say, after four to six incredibly dry months for many parts of New Zealand, it’s nice to see rain makers in our weather maps again and it’s great to hear from more and more New Zealanders who tell us rain has been falling where they are and they couldn’t be happier.

However it’s very important to note that there are still some very big areas of the North Island that need a day or two of solid rain.  Hopefully April will finally deliver that.

Hi, I was wondering why Canterbury has not been declared a drought zone? We have had far less rain than most places since September and yet the West Coast is in drought??! Yesterday is a case in point. Total rainfall in Christchurch, less than 1mm. My lawn is a brown/grey colour and rock hard.

I would suspect the irrigation systems we have here has a lot to do with it. The ‘wet’ regions over most of the NI and West Coast just are not as well set up or used to little rainfall like the farmers and people in Canterbury. Quite often for example a month classified as ‘dry’ in Auckland/Northland is usually wetter than a ‘wet’ one in Christchurch.