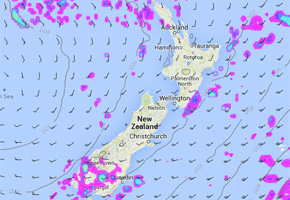 This week through till Wednesday is looking fairly cold, especially cold today and on Tuesday under a southwesterly airflow. Then Thursday comes along and a high moves in bringing settled conditions, this will likely mean a cold frosty start to the day. Finally on Friday a northwesterly airflow develops over the South Island and lower North Island while Thursdayâ€™s high now sits over the upper North Island.

For todayâ€™s weather check out this morningâ€™s national forecast here.

On Tuesday we have a cold southwesterly airflow continuing over the country, it will have eased a little from Monday. Expect showers for Southland and Otago with snow flurries to 300m in the morning lifting to 500m by evening, the rest of the South Island is fairly dry although Banks Peninsula sticking out the way it does gets showers with snow to 400m. For the North Island itâ€™s Taranaki northwards in the west that mainly sees showers with strong west to southwest winds, drier out east.

Wednesday is a transition day of sorts, still fairly cold though with cold southwesterlies easing for most. Showers clear the upper North Island in the morning then sunny areas develop afternoon, sunny from morning elsewhere out west. Showers clearing most eastern regions (mainly near or on the coast) during the afternoon and evening. Showers clear in the morning for Southland and Otago, sunny on the West Coast. As mentioned above temperatures overnight are likely to be cold with frosts for many, heavy for some inland South Island areas.

Thursday sees mostly sunny weather over New Zealand thanks to a high pressure system, winds will be light for most although westerly winds tickle Southland during the day and expect southeasterlies for Northland.