Cold marches northwards, with gales for some (+13 Photos, +9 Maps) 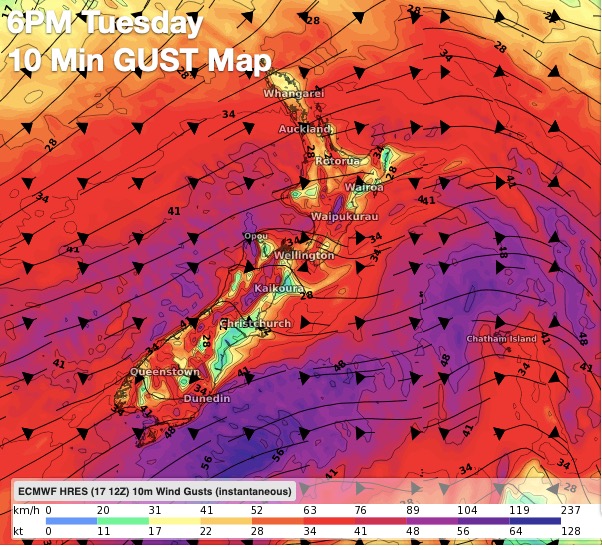 It’s a wintry day for those in the south and it’s a windy day for many further north. The south to south west change moving up the country is dropping temperatures with Dunedin, Queenstown and Invercargill three of the coldest centres so far today.

TEMPERATURES
Coldest region is Southland with temperatures between +1C and +7C as of 11am. Otago wasn’t much different with +3C to +8C this hour. Canterbury’s current temperature range is +3C to +10C in populated areas.

WeatherWatch.co.nz’s lowest reading as of 11am were a range of +1C to -3C just around Arthur’s Pass (depending on altitude).

Northern NZ is cooler, but not cold like the South Island. To give you an idea as of 11am it was +7C in Dunedin and +15C in Auckland.

GALES
Westerly winds are howling through central NZ with winds over 100km/h through parts of Cook Strait and out east. Hawke’s Bay has gale force winds which are only adding to the pain for those needing rain, with gusty winds being seen to blow top soil away at times this morning.

Winds may continue to pick up today in many regions but should ease back this evening, although Coastal Dunedin and Southland may see winds increasing across today.

Wednesday will be another blustery day for NZ, especially in coastal areas further south, but not quite as intense as Tuesday. But the Chatham Islands will be smack bang caught up in the Southern Ocean storm on Wednesday with damaging gales, wintry conditions and highly dangerous seas.

SNOW WARNINGS
Snow Warnings from MetService have just been included in our overall MetService Warnings page – so please do keep up to date with any Highway Snowfall Warnings and any Gale Warnings for land. All tax funded weather warnings can now be found at WeatherWatch – here’s the link: https://www.weatherwatch.co.nz/maps-radars/warnings/metservice

COASTAL DANGERS
Meanwhile, dangerous waves will be spreading from the southern South Island to the Chathams over the next 36 hours, with peak waves over 10 metres. Dangerous rips, waves and swells will also move up the entire western coastline of NZ with waves of 5 to 6 metres possible in western coastal Auckland.

The Chatham Islands will be especially exposed to hurricane force winds at sea and 10 metre+ swells on Wednesday.