Home > News > Cloudy for most, mild for North Island’s...

Cloudy for most, mild for North Island’s east coast 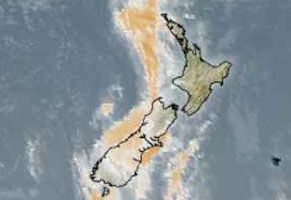 The South Island is fairly cloudy with a front and associated low pressure system currently working it’s way eastwards over the mainland. The West Coast has rain and so does most other places although from Christchurch northwards in the east it is dry in parts for now however that will change a little later this afternoon as a few showers move north. Rain on the West Coast is set to ease later this afternoon.

The North Island looks fairly cloudy also however there are some sunny areas, on the east coast it is currently mostly sunny with little wind and mild temperatures. Napier and Hastings each are sitting on 19 and 20 degrees respectively. Wellington is currently the windiest place to be with brisk northerlies at 39 km/h gusting to 50km/h.

The odd shower is dotting the upper North Island however for the most part it is generally dry, a band of showers offshore to the west is just about to tickle Taranaki.